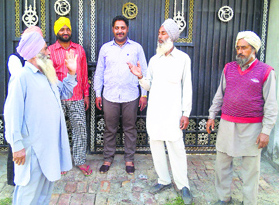 Bathinda, Punjab: Prof. Devinder Pal Bhullar’s family today described the Centre’s move not to execute him, owing to his frail mental health, as a poll gimmick. Bhullar’s cousin Gurbachan Singh, 10 years his senior, said the family would be relieved only when Devinder was released. “Devinder was docile and shy. It is hard to imagine how he has survived all these years in jail,” he said.

Gurbachan’s son, Ranjeet, said he had last met his uncle in prison in 2010. He said the Centre only wanted Sikh votes by showing it was sympathetic towards Bhullar.

“The government’s statement in court means nothing to us. He has already suffered a lot and his mental health is pitiable,” he said.

Bhullar moved a mercy petition before the President in January 2003. His request was rejected eight years later in 2011. Last year, the Supreme Court rejected his plea for mercy and he filed a review petition.