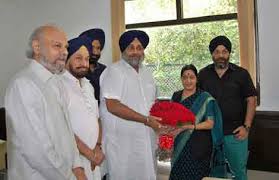 Chandigarh: In a meeting with union minister of external affairs Sushma Swaraj, a delegation led by Punjab deputy chief minister Sukhbir Singh Badal on Saturday took up the issues of Sikhs living in abroad.

The delegation asked her to take up the issues with her counterparts in various countries. It told her that Sikhs were in a sizeable number in the US , Canada, the UK, France, Afghanistan, Iran and Pakistan, and were recognised as representatives of India because of their identity but in countries where they were small in number, they continued to face problems that could be addressed with India’s intervening.

Delhi Sikh Gurdwara Management Committee president Manjit Singh GK, Rajya Sabha member Naresh Gujral, and Akali leaders Balwant Singh Ramoowalia, and Manjinder Singh Sirsa were part of the delegation. The issues were raised after DSGMC president GK visited these countries, interacted with the Sikh diaspora, and prepared a report for his party. “During the days of militancy, many Sikhs families from Punjab migrated to the US, the UK and Canada as political asylum seekers, even when they were not involved in any crime against the country and even during stay abroad had contributed to state’s growth. Many of them want to return to their roots,” said Sukhbir, demanding that the names of these Sikhs be removed off the black list to allow them to come home.

The Indian missions abroad denied visa to the dependents of the asylum seekers and Indianorigin foreign nationals, broke their link with the community, argued the delegation. Taking up the issue of the Sikhs and Hindus displaced from Afghanistan and forced to migrate to India, the delegation demanded that the Centre provided them with residency and citizenship rights. “Sikhs living in France are denied the right to wear turban. It needs to be taken up with the French government,” Sukhbir told external affairs minister Swaraj.