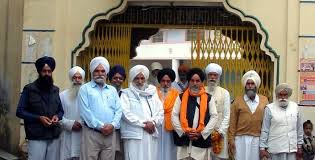 Comments Off on In Haryana, SAD goes soft on separate gurdwara panel 90 Views

Karnal, Haryana: In a last-minute effort to woo the Sikh voters of Haryana for the Indian National Lok Dal (INLD), the Shiromani Akali Dal (SAD) has agreed to initiate a dialogue on forming a separate religious body in the state.

It has proposed a 10-member team (five each from the Haryana Sikh Gurdwara Parbandhak Committee [ad hoc] and Punjab) to decide the long-pending demand of a section of Sikhs in Haryana.

The Jhinda faction of the HSGPC has declared support for the INLD in the Lok Sabha elections.

He has shelved his plant to contest from the Haryana Jan Shakti Party, a new political outfit.

The SAD had always opposed the demand for separating Haryana Sikh bodies from the control of the Amritsarbased Shiromani Gurdwara Parbandhak Committee (SGPC).

“Together we will take up the HSGPC matter with the SGPC so that it considers the longstanding of Haryana Sikhs. The decision taken by the 10-member team after the Lok Sabha elections will be final,” said Sandhu.

Welcoming the Akali-INLD initiative, Jhinda said he had struggled for years to form an independent body to manage the Sikh shrines of Haryana.