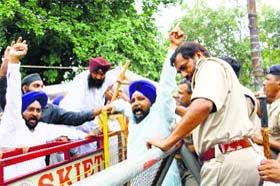 Chandigarh: The stalemate over the control of gurdwaras in Haryana continued today as members of the Haryana Sikh Gurdwara Management Committee (HSGMC) and the SGPC traded charges over proposed talks to find a solution. While the HSGMC accused the SGPC of spreading misinformation, the SAD said the Haryana Sikh leaders should honour the commitment made by their representatives. The two sides could not even decide on who would figure on a five-member committee for the proposed discussions. Upping the ante, an SGPC member from Kurukshetra moved the Supreme Court seeking quashing of the “divisive” law — Haryana Sikh Gurdwara (Management) Act — enacted by Haryana to set up the HSGMC. A delegation of the HSGMC executive today met Haryana Governor Kaptan Singh Solanki and submitted a memorandum protesting the interference of the SGPC and the Akali Dal in Haryana affairs and the “forcible and illegal” occupation of the Sikh shrines by members of the SGPC taskforce. The delegation was led by HSGMC president Jagdish Singh Jhinda and comprised senior vice-president Didar Singh Nalvi and general secretary Joga Singh.

They told the Governor that the interference of Punjab CM Parkash Singh Badal and SGPC president Avtar Singh Makkar in the affairs of Haryana gurdwaras might lead to “bloodshed”. “If Badal and his associates do not desist from indulging in unconstitutional and unlawful activities, the Punjab Government should be dismissed and the state be put under President’s Rule to avoid law and order problems and bloodshed,” the memorandum addressed to the President of Indian read. While the two sides reportedly agreed during a meeting at Jagadhri (Yamunanagar) yesterday on forming a five-member committee, the HSGMC today claimed the other side had spread misinformation by saying the HSGMC had agreed to a dialogue to resolve the issue. Nalvi told The Tribune that the HSGMC had never agreed to the formation of a five-member committee. “In fact, we told the SGPC and SAD leaders that talks would only be possible if the SGPC taskforce and SAD leaders vacated the gurdwaras and handed these over to the HSGMC. The morcha would be lifted once this happens.” “We categorically told the SGPC that gurdwaras in Haryana had to be vacated before going to the negotiating table.” He further said the Governor assured the delegation that he would not intervene since it had the stamp of the Haryana Vidhan Sabha. SAD leaders, however, said the proposal to have a five-member committee of Sikh intellectuals was mooted by Delhi Sikh Gurdwara Management Committee (DSGMC) former chief Paramjit Singh Sarna, who was part of the Haryana delegation. “Jhinda and Nalvi should honour the commitment made by the representatives sent by them for the meeting. We had told the Haryana Sikh leaders that SGPC employees would leave gurdwaras when their supporters lift the dharna. But we are still hopeful of a solution,” said SAD spokesman Daljit Singh Cheema.

The HSGMC executive felt the SGPC and SAD were playing a “dubious” game by expressing the desire to finding an amicable solution on the one hand and going to the Supreme Court to get a stay on HSGMC operations on the other. In his plea to the Supreme Court, SGPC petitioner Harbhajan Singh has urged the court that the HSGMC “be declared null and void and ultra vires of the Constitution and is liable to be quashed”. Senior advocate Harish Salve appeared before a Bench headed by Justice TS Thakur and sought an early hearing of the PIL, contending that the situation was highly volatile and the court’s immediate intervention was required to restore normalcy. The Bench, however, advised the petitioner to take up the plea with Chief Justice RM Lodha. Now, the petitioner can approach the CJI Bench only on August 8 since the CJI is heading a five-judge Constitution Bench that will hear pending cases involving interpretation of the Constitution in the next two days. Jhinda said he told the Governor that the SGPC, SAD and their cohorts were giving false advertisements in newspapers and spreading lies with a view to misleading people. “They have tried to mislead the Governor and misinterpreted a past order of the Supreme Court to suggest that it had restrained Haryana from passing any law on the issue,” he said adding that they had asked the Governor and the Union Government to get the Haryana gurdwaras vacated from “unconstitutional and illegal possession of their armed me to avoid bloodshed”. Lashing out at the SGPC leadership for talking to the media yesterday on behalf of the HSGMC, Joga Singh said: “Who is Avtar Singh Makkar to give a statement on behalf of the HSGMC. We have never authorised him to select all five Sikh scholars to form a committee.