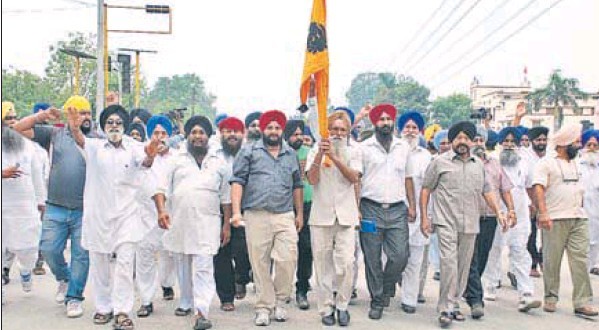 The Sikh leaders were demanding that the gurdwaras in Haryana be handed over to them and administration should take steps to remove the SGPC task force members from the shrines.

The protest march started from Jagadhri gate and concluded at the assistant deputy commissioner’s (ADC) office where they handed over a memorandum addressed to the chief minister to the ADC.

Jhinda said that all formalities for setting up the separate body had been completed and there should not be any hitch in transferring the management for Sewa in the shrines.

Nalwi said that the implementation of the decision was state government’s responsibility and it should take appropriate administrative steps, adding that the HSGPC would not take law into its hand.

Meanwhile, a large number of Sikh leaders owing allegiance to SAD (Badal) and the Shiromani Gurdwara Parbandhak Committee (SGPC) continued to lay siege at the historic Manji Sahib and Panjokhra Sahib gurudwaras to resist any move of forcibly taking over of the shrines.

The SGPC supporters claimed that under no circumstances they would allow the take over of Sikh shrines by anybody.