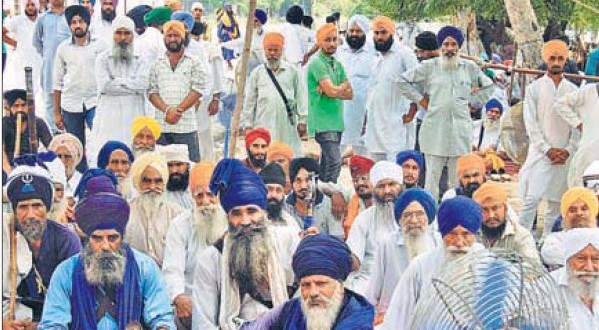 Chandigarh: In a significant development, key leaders of the Shiromani Akali Dal (SAD) and the Shiromani Gurdwara Parbandhak Committee (SGPC) met representatives of the Haryana Sikh Gurdwara Management Committee (HSGMC) at Ja g adhri in Yamunanagar district on Monday. However, both sides gave conflicting versions on the outcome of the secret meeting, which was held on the directions of Akal Takht jathedar Giani Gurbachan Singh.

According to SAD spokesperson Dr Daljit Singh Cheema, it was decided to set up a committee of five Sikh intellectuals to resolve the crisis arising out of the formation of a separate gurdwara panel in Haryana. But HSGMC president Jagdish Singh Jhinda, who was not present during the talks, denied that the Jagadhri meeting had prior approval of the general House of the newly-formed committee.

The meeting was the first major parley between the two sides in the wake of a tense stand-off over an agitation by HSGMC supporters to take control of the historic Chhevin Patshahi Gurdwara at Kurukshetra since Saturday.

The notable absentees were Jhinda and another top HSGMC leader, Didar Singh Nalwi, who were excommunicated by the Akal Takht last month for their role in the formation of the HSGMC. Joga Singh denied that the Haryana leaders accepted any final decision on the formation of a five-member committee. “The Punjab leaders forwarded a proposal to form the committee, but we put forth our precondition that the gurdwaras should be first vacated of nihangs and the SGPC’s task force members before any further dialogue,” he said.

Joga Singh said Jhinda wasn ot informed about the meeting as the Punjab delegation was not ready to talk to the HSGMC president, even as Jhinda said the HSGMC had called a rally at Kurukshetra on Thursday to discuss plans to get the shrines vacated.

SARNAS’ ROLE
The Sarna brothers, Paramjit Singh Sarna and Harvinder Singh Sarna, who are known bête noire of the SAD and the SGPC, were also present at the meeting that lasted three hours. Also in attendance was Sikh scholar Dr Prithipal Singh Kapoor.

Top SAD sources said the meeting took place following the intervention of Akal Takht jathedar Giani Gurbachan Singh, who telephoned Sarna brothers also, asking them to go to Jagadhri for this meeting held at the residence of a person known to both factions.

It is after the cancellation of the July 27 Panthic convention in Amritsar, on the order of the Akal Takht, that this meeting was held to sort the issue. “We told SAD leaders to accept with humility the reality of HSGMC. This fact cannot be reversed. They will have to accept it,” Paramjit Singh Sarna said when contacted.

The SAD leaders, sources say, countered HSG MC members ,saying that the contentious legislation would be reversed after the “change of guard” in poll-bound Haryana.

A well-placed source present at the negotiations said Haryana Sikh leaders bluntly told the SAD leaders that the only way left before the latter was “to devise a face-saving formula” and also reminded the SAD of “misusing the authority of Akal Takht”.

The Haryana side also floated the idea that the SGPC chief should speak to a prominent Jalandhar-based Punjabi newspaper editor and consult Sikh legal luminaries and historians so that the issue is resolved amicably and the “SAD gets an escape route from this controversy.”