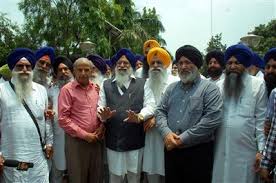 Comments Off on HSGMC row: SGPC to take up matter with new Haryana govt 88 Views

Fatehgarh Sahib, Punjab: Though the Indian National Lok DalShiromani Akali Dal alliance has put up a dismal show in the Haryana assembly polls, the Shiromani Gurdwara Parbandhak Committee (SGPC) has decided to ask the new BJP government to review the resolution passed by the previous Congress regime on the formation of a separate gurdwara management committee for Haryana.

Talking to HT, SGPC chief Avtar Singh Makkar, who was here to preside over an executive committee meeting, said since the BJP was SAD’s ally in Punjab, he was hopeful of pursuing the matter through the Punjab government. He said though the matter was pending in the Supreme Court, the SGPC would try to convince the new BJP government in Haryana to review the previous government’s ‘vicious’ move to divide the Sikh community by forming the Haryana Sikh Gurdwara Management Committee (ad hoc).

When it was pointed out that the SAD had supported the INLD, not the BJP, in Haryana, Makkar said they would hold detailed deliberations on the issue with senior leaders of the SAD-BJP government before pursuing the matter. ` About the resolution passed by the executive committee, the SGPC chief said they had approved the recommendation of the relief committee formed in Jammu and Kashmir for providing financial assistance of ` 1 lakh each to 127 Sikh families who had lost their houses in the recent floods.

He said compensation of ` 50,000 would be given in the case of partially damaged houses, ` 25,000 for minor damages. He said the committee had also passed a resolution to provide ` 50,000 to the kin of people who had lost their lives during the floods.

About kar sewa in Pakistan’s Sikh shrines being allotted to the Delhi Sikh Gurdwara Management Committee (DSGMC), Makkar said the SGPC had held meetings with the Pakistan government, but the latter decided the matter in favour of the DSGMC.