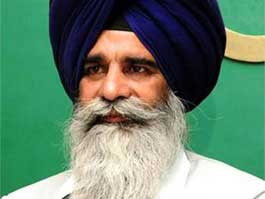 Kurukshetra, Haryana: The executive committee of the Haryana Sikh Gurdwara Management Committee (HSGMC) in its meeting held at Gurdwara Chhevin Patshahi at Gulha on Saturday authorised its president Jagdish Singh Jhinda to take all needed steps to contest the case pending in Supreme Court regarding the legality of the constitution of the HSGMC.

He added that the executive committee condemned the move of the Prakash Singh Badal’s government in Punjab to reopen a five-year-old case against HSGMC member Baba Baljit Singh Daduwal in Bathinda to stop him from participating in the HSGMC activities in Haryana.
The committee felt that while Badal has approached the Supreme Court in this religious matter, on the other hand to save his face he is directing the Akal Takht jathedar to constitute a ‘talmale committee’ to negotiate with leaders of the HSGMC.

Joga Singh alleged that Badal had already lost the battle after the Haryana assembly constituted the HSGMC and now he is using the Akal Takht jathedar to meet his political ends.

He said 10 out of 11 executive members were present in the meeting. Senior vice-president Didar Singh Nalwi could not attend the meeting but his consent about the decisions was taken through telephone.