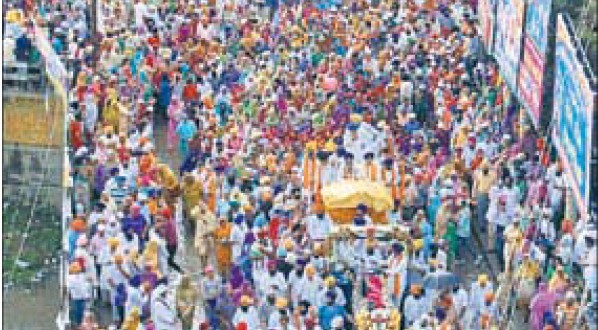 Batala, Punjab: The sounds of Gurbani from 101 simultaneous Akhand Paths (continuous recitation of the holy book) across the industrial town amplified the spiritual atmosphere of Babe Da Viah, annual festival that this year marks 527th anniversary of the wedding of Guru Nanak Dev.

Braving the heat, lakhs of devotees from across the world converged in the town to participate in the grand procession, where the groom is none other than the founder of Sikhism and the bride is Mata Sulakhni.

Embodied in Guru Granth Sahib placed in a palanquin, the Guru led the procession of baratis (wedding guests) through the main bazaars of the historical town that was adorned with buntings and other decorations all the way to the destination.

To the bursting of crackers, the wedding procession that started from Sultanpur Lodhi on Sunday morning was received at 12.30am at Gurdwara Dera Sahib, at the place where the Guru’s baraat was received here in 1487. Gurdwara Kandh Sahib derives its name from a wall in the shrine. The myth has it that Guru Nanak sat close to the dilapidated wall and an old woman told him to move away or it would collapse on him. The Guru assured her there was no cause for alarm, as the wall would stay intact for long time. So it is, albeit preserved in glass.

A massive cleaniness drive is on in the town that is decorated with lights and flowers. As the Panj Piaras led the devotees carrying the palanquin of Guru Granth Sahib, the hymn singers, gatka artistes, and drum-beating Nihangs formed the procession.

On Saturday, thousands of people from the city had moved to Sultanpur Lodhi to join the ‘barat’. The marriage party was welcomed at Sultanpur Lodhi, Goindwal Sahib, Khadoor Sahib, Khalkian, Baba Bakala Sahib, Mehta Chowk, Achal Sahib and Batala in a traditional manner.