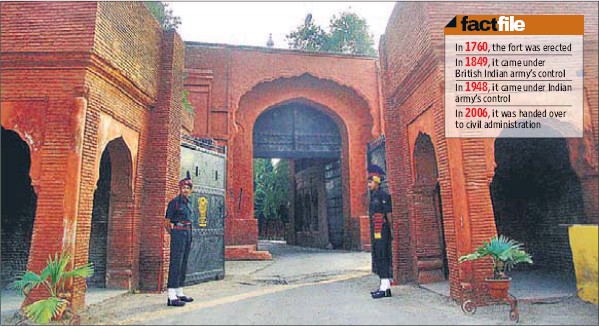 Amritsar, Punjab: MRITSAR: The Gobindgarh Fort, a legacy of Maharaja Ranjit Singh that remained under the control of the army for over 150 years, is yet to be thrown open to the public even as its keys were handed over to the civil administration in 2006 by then Prime Minister Manmohan Singh.

While there seems to be no dearth of funds for the ongoing conservation of the historic fort, the snail’s pace of work being undertaken there is delaying the plan to open its gates for public viewing.

The officials of the district administration claimed that the deadline for the project was over long ago and the officials concerned of the tourism department, who are overseeing the conservation work, were directed to expedite the same.

However, the tourism department officials said there were different deadlines for various projects to be undertaken. They added that even as the work on various edifices inside the fort is underway, detailed project reports (DPRs) for other projects are still to be prepared and sent to the central government for its approval and funding.

HISTORY OF THE FORT
Erected in 1760, the fort was initially called ‘Bhangian Da Quila’, named after Bhangis, one of the 12 Sikh ‘misls’. It was later rechristened as ‘Gobindgarh’ after Guru Gobind Singh by Maharaja Ranjit Singh. The fort came under the control of British Indian army in 1849, when the British annexed Punjab after Maharaja Ranjit Singh’s death. It came under the control of Indian army in 1948 and 26 units of the army had been stationed here since then.

THE PROJECT
The historic structures situated inside the fort, including ‘General Dyer’s Bungalow’ and the ‘Phansi Ghar’, were to be conserved under this project, which has the funding of the central government. There was a proposal to construct a hotel, a museum, a parking lot and a coffee shop in the fort, besides conserving the existing historical structures.

“The work on the project has exceeded the deadline. However, the work on the construction of the parking lot and the coffee shop is over,” said Amritsar deputy commissioner Ravi Bhagat.

THE FUNDING
“Besides the central government, the Asian Development Bank (ADB) is also funding the project. Hence, there is no dearth of funds. However, the work is extensive and needs precision and time. We are still in the process of preparing DPRs for most projects to be covered under the main project,” said Balraj Singh, district tourism officer.

GENERAL DYER’S BUNGALOW
He said that even as ₹ 1 crore has so far been spent on the conservation of the bungalow of General Dyer, notorious for presiding over the Jallianwala Bagh massacre of 1919, a lot of work still remains to be completed there.

“A museum is being erected inside the fort. A lot of work still needs to be undertaken in terms of lighting and placement of doors. The ‘Phansi Ghar’ and other edifices too have to be conserved. It is like covering a plethora of projects under one big project,” he said.

The tourism officer said that though the monument had been handed over to the civil administration eight years ago, it took almost two years to arrange funds from the government.

“Now that we have a steady flow of funds, we hope to complete the work soon,” he maintained.

Previous: SAD delegation calls on UP CM over Saharanpur clash
Next: DSGMC chief open to All India Act for gurdwaras