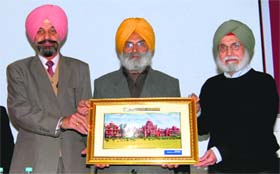 Amritsar, Punjab: It’s a popular fact that Maharaja Ranjit Singh’s regime was built on a secular arrangement which treated all religion, communities and sects with respect. Historian Bhupinder Singh Marwaha visited the city to further exemplify and give some additional information about his glorious legacy.

The art historian from Canada, presented a unique ‘pictorial lecture’ on Maharaja Ranjit Singh and Court of Lahore Darbar’ at Khalsa College recently. He showed rare paintings and pictures relating Maharaja’s times and shed light on the role of European officers in his court.

The paintings, sourced from various private and art gallery collections, were originals from the era. “The exhibition essentially focuses on the foreign generals and close aides of Maharaja Ranjit Singh and also the additional material apart from the popular works we know about him,” said the academician. “Most of them are sourced from Emily Eden’s work, a British aristocrat, who accompanied the then Governor General of British India. She made a vivid account of Maharaja’s kingdom. Her memoirs throw light on the significant aspects of his rule,” said the historian.

Marwaha presented interesting accounts of foreign officers serving in Ranjit Singh’s army and working in his court. “Maharaja had Germans, French and Italians serving in his court. Jean Francois Allard, who built ‘fauj-i-khas’, the unique military group of Maharja Ranjit Singh, Jean Baptiste Ventura, who modernised Khalsa Army and Johann Martino Honingberger, all came from foreign lands,” explained Marwaha. He said old painting records confirmed that Maharaja’s vast rule was secular and modern in character, as is the popular belief.

“These paintings are remarkable, like some facts that once his regime came to an end, Maharaja Ranjit Singh spent rest of his life in England. And his son was believed to have served in military regiment in Canada, making him probably the first Indian to set foot in Canada. All these interesting details intrigue me more,” said Marwaha.

Calling his interest ‘pure passion’ to put together interesting details about Sikh history, Marwaha said though his profession differed from his passion, he was part of a group voluntarily working to put up exhibitions across Canada and India. “It’s not a particular area of research for me, just a passion. I approach private collectors, source out from museums and scholars to enrich myself and others,” he added.

Marwaha had been an advisor on various boards of prominent academic institutions in Canada. The exhibition created by him was first mounted by Sikh Foundation of Canada at Royal Museum, Toronto.

Ask him about some striking successes of Maharaja Ranjit Singh’s regime and he points out a few, “The success of his regime is because he respected and created space for everyone, whether religion or individuals.” As for the exhibition, it too had highlighting points of the same with the works like his court, shield bearing miniatures of his family and generals of the court and some of the salient features of his kingdom.