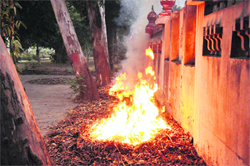 Comments Off on Heritage comes under threat 483 Views

The practice of burning waste here is rampant. It is not only damaging the heritage structures but also polluting the environment. Residents who take a stroll here in the morning or evening hours have complaint about of this menace many a times earlier. The MC officials have flatly refused to accept the involvement of their sanitation staff in this act, in spite of the earlier media reports, where even the pictures of the offenders were published. Despite the fact that crores of rupees are being spent by the government to preserve this heritage site, garbage burning on its premises is a regular affair.

This even shows how serious the authorities are to realise the dream of Deputy CM of transforming this holy city into a heritage-look city. The norms are being openly flouted to damage the historic monument.

The inner side of the boundary walls, which were painted recently, have turned black due to smoke. The burnt leaves lying next to it testify it.

This morning, the Tribune team found a group of people setting ablaze dry leaves on the premises. On looking the lensman they fled away. The onlookers claimed that they were the MC staffers only and regularly burn the waste here.

Ironically, Mayor Bakshi Ram Arora’s new office is located on the panorama within the Bagh. He passes through this stretch daily to attend his pre-lunch session with the MC officials, but the dismal state of affairs never catches his fancy.

The residents who stroll here complained that they come to the Bagh to breathe fresh air, but inhale poisonous gases emanating from the burnt leaves and plastic waste. “The MC staff routinely burns the garbage in the Bagh, not realising the damage they cause to the environment. We have questioned them many times but they do not listen to our pleas,” said NS Gabaria, a retired railway officer.

MC Commissioner DPS Kharbanda said, “It is a serious offence. I will look into the matter and stern action will be initiated against those who burn the trash on this historic campus.” 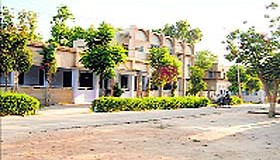 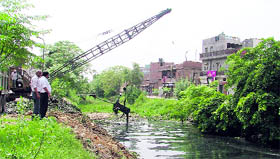