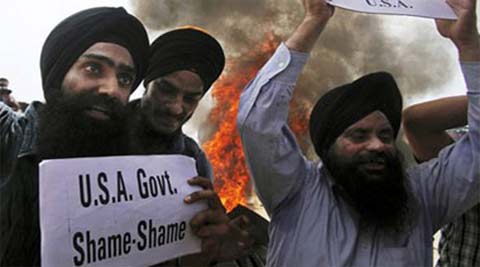 New York, USA: A man accused of pulling the beard of a Sikh professor before a group of young men who had called the professor “Osama” and a “terrorist” attacked him, has been arrested and charged with a hate crime, police said Saturday.

Christian Morales, 20, was charged with aggravated harassment in connection with September’s attack on Columbia University professor Prabhjot Singh, who suffered a broken jaw

Singh, 31, was walking home with a friend in upper Manhattan when he was approached by a group of 12 to 15 young men, he said days after his attack.

“I heard, `Get him. Osama.’ I heard `terrorist.’ And I felt somebody grab my beard,” Singh said then.

He was then kicked and punched in an attack that ended after other people intervened, police said.

Morales was in custody and was unavailable for comment. A phone number for him was out of service, and it was unclear if he had an attorney.

Detectives from the hate crimes task force are investigating the case.

Sikhism is a peace-loving religion that originated in India and preaches equality and a commitment to justice. Its practitioners have been targeted by attackers who in some cases confuse Sikhism and Islam because Sikh men and boys are required to wear turbans and beards.

Singh co-authored a 2012 op-ed in The New York Times accusing the federal government of failing to accurately measure the extent of anti-Sikh violence in response to the August 2012 shooting at a Sikh temple in suburban Milwaukee that left six people and the white supremacist gunman dead.

In the op-ed, Singh and his co-author argued that it is wrong “to assume that every attack against a Sikh is really meant for a Muslim.” They said Sikhs have historically been targeted.

Previous: 35 Punjabi detainees in US call off strike
Next: Help Fill the Capitol with Sikh Americans!