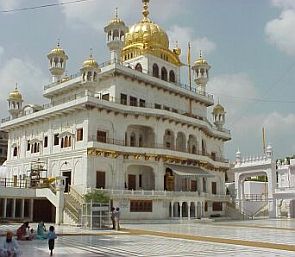 Amritsar, Punjab: The Haryana unit of the Shiromani Akali Dal (SADA mritsar) wants the Akal Takht to play the lead role in finding an amicable solution to the Haryana Sikh Gurdwara Management Committee (HSGMC) issue that is acceptable both to the Sikhs of Haryana as well as to the Shiromani Gurdwara Parbandhak Committee (SGPC).

This viewpoint was expressed in a memorandum that was handed over to Akal Takht jathedar Giani Gurbachan Singh by a two-member delegation of SAD (Amritsar) from the neighbouring state.

The delegation comprised Ajit Singh Kahlon, president of the Haryana unit of the party, and Mukhwinder Singh Cheema. They claimed that the memorandum was prepared after taking party chief Simranjit Singh Mann into confidence.

“The feud must be put to an end and a solution found at the earliest. The violence that took place outside the gurdwaras in Haryana had tarnished the image of the Sikh community,” the memorandum said.

In the memorandum, they demanded that the Akal Takht form a joint committee for finding a solution after talking to the leaders of the HSGMC and the SGPC. The committee could comprise members of both the sides as well as some neutral members of the community, the memorandum suggested. “Thereafter, the Akal Takht can take a final decision on the basis of the suggestions given by the committee,” the two leaders told the media.

When pointed out that the matter was before the Supreme Court, which had ordered a status quo on the management of gurdwaras in Haryana, the SAD (Amritsar) leaders said the Akal Takht was the supreme temporal authority of Sikhs and was within its rights to take a decision.