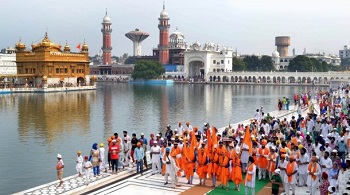 Deepmala and Amrit Sanchaar will be held today

SGPC Secretary Manjit Singh stated that a beautiful exhibition of weapons will be organized at Sri Akal Takht Sahib and Gurdwara Baba Atal Rai Ji on the birthday of Sri Guru Ram Dass Ji from 8:30 am to 12:00 am. Religious ceremonies will be performed during the whole day at Diwan Hall, Sri Manji Sahib. A firework show will be performed after Rehras at Sri Harmandir Sahib. A special Poetic Function will be organized at Sri Manji Sahib from 8 pm tonight.