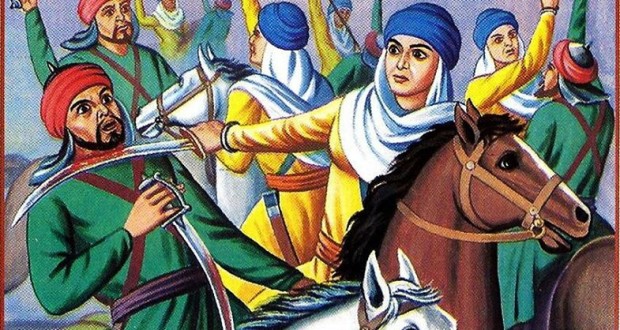 “What does it matter if our soldiers enjoy her for a few days? I shall see that she is returned to you as soon as I find a clue of her.”

Her husband was disappointed and turned to the forest to meet the Sikhs and appeal to them. In those days, Ahmad Shah Abdali invaded India again and again and the Mughal Empire at Delhi and the governor of Lahore had become very weak. Abdali looted Indian cities, forcibly took beautiful Hindu ladies with him, but the Sikhs attacked his army when he was going back to Afghanistan. They recovered the property he was taking with him, and got the ladies, that he was forcibly taking, released. They fought a guerrilla war and slipped back into the forest before they could be caught.

The groom met some Sikhs in the forest. They consoled him and baptised him following which he was named Teja Singh. One night, a party of Sikhs along with Teja Singh, attacked the same party of plunderers and taught them a lesson. Teja Singh’s wife, who was in a miserable condition, was also rescued from them. She wanted to commit suicide, but was dissuaded from doing so. She was encouraged to live and was baptised and was named Baghel Kaur. She always had a long sword with her. Many ladies like her lived in the wilderness near the pond of Kahnuwan in the company of the Sikhs.

All left the pool of Kahnuwan (District Gurdaspur). They had to cross a dense forest and thorny bushes grown on the bank of the river Bias. In fact, these dense, thorny bushes served them as a fort as the Mughal soldiers were afraid of crossing them. Inside this dense forest, the Sikhs had cleared some area and lived in tents there. They lived on the ration they could bring from outside and whatever they could find in the forest.

After a long journey, they met their companions who were there with their leader Nawab Kapur Singh. He exhorted the gathering to be ready to fight against aggression for the sake of justice

Mir Mannu was the governor of Lahore. His minister Kaura Mal was sympathetic towards the Sikhs, but after the death of Kaura Mal, Mir Mannu turned his attention to finish the Sikhs. He was a tyrant and bent upon converting Sikhs to Islam. He used every possible punishment to subordinate the Sikhs, who had left villages and started living in thick forests. In those days, Sikhs used to say,

“Mir Mannu is our sickle and we are his grass blades. As he cuts, more than two hundred times we grow.”

Abdali consulted Mir Mannu and sent a challenge to the Sikhs to come out of the forest and fight face to face. Nawab Kapur Singh accepted the challenge. The next day, four thousand Sikhs with a few hundred Sikh ladies, including Baghel Kaur, divided themselves in two parties and, riding on their horses, entered the field, fully armed, with sword and spears. They were opposed by 10,000 Pathan forces. At the end of the day, 500 Sikhs became martyrs, but the Pathans suffered a heavy loss. Second day, Baghel Kaur with a few other ladies fought so bravely and courageously that it would be remembered for ever. In the evening the Pathan army had to retreat, but in the confusion that prevailed Baghel Kaur and four other ladies were separated from the Sikh forces. These ladies reached a small village, cooked their food and slept on the ground. Turn by turn, one of them remained awake to look after the horses and the arms. They got up before daybreak, performed their morning prayer and started. Soon they found fifty enemy soldiers of a patrolling party coming towards them. Five of them proceeded towards Baghel Kaur and her party. They did not realise that they were going to face a tough enemy. They planned to capture them and marry them. All of a sudden, Baghel Kaur came forward and cut the sword of the first soldier with her sword. In the meantime, a companion of her injured him with her sword when he was returning to save himself from the second attack. Another soldier attacked Baghel Kaur with his spear, but her friend checked his attack with her sword and injured him. Now the injured soldiers started returning to their party to seek help. In the mean time Baghel Kaur and her companions rode away to the thick forest to meet their companions.

All the Pathan soldiers started chasing Baghel Kaur and her friends. A Sikh watchman informed the other Sikhs in the forest about the coming Pathans. At once, the Sikhs came out and killed the Pathans in a few minutes. Three Sikhs were also killed in this fight. Sikhs persuaded Baghel Kaur and her companions to stay in the village but the brave ladies refused, wanted to stay with them, and die fighting.

Mir Mannu was a notorious bigot. He massacred Sikhs and proclaimed a reward of twenty-five rupees per Sikh head. He killed no less than thirty thousand Sikhs. He ordered that any Sikh lady found anywhere should be caught and forced to embrace Islam. Baghel Kaur wanted to save a few ladies who were still in the village and could not leave because two of them had small children. One night Baghel Kaur disguised herself and went back to her village to save the three Sikh ladies who were hiding in the house of a female Muslim friend. She contacted them at midnight, encouraged them to accompany her early in the morning and leave for the thick forest on the other side of the river Beas.

After a short nap of two hours, she along with three Sikh ladies and two children left the village at 4am. Four soldiers who were sleeping outside the village saw them and followed them to the rive bank. Baghel Kaur asked the two ladies to cross the river along with their children and herself along with the third lady faced the soldiers. She thrust her spear in the chest of the first two soldiers who came forward before they could attack her. One of her companions tried to attack the third soldier, but his spear injured her arm before she could attack. Baghel Kaur gave her horse to her injured friend and asked her to cross the river at once. Baghel Kaur took the horse of the injured soldier and fought against the remaining two soldiers bravely and fearlessly. The soldiers as well as Baghel Kaur were injured and bleeding. She took courage and in the twinkling of an eye crossed the river on her horse. Now all the four ladies with two children started on their horses and soon they were out of sight of the soldiers who were chasing them. After covering a long distance the party reached the destination and met a party of the Sikhs.

Plight of the Sikh ladies detained in the camps of Mir Mannu was miserable. They were tortured and kept thirsty and hungry as they refused to be converted to Islam. Every one of them was allotted a small millstone to grind a fixed quantity of wheat. It was ordered that the children of these ladies be snatched. One soldier threw a child up in the air and the other killed him with his spear before he could touch the ground. The dead bodies of these children were cut into pieces and the ladies were garlanded with those pieces. Pieces of flesh of the children were thrust into the mouth of their mothers. In spite of all that, none of the ladies cried or yielded to embrace Islam. Once this horrible scene stunned Mir Mannu. When he reached the palace after visiting the camp, he did not talk to anybody. It seemed he repented. He left for hunting with only four soldiers. While he was hunting, his horse was scared, ran very fast and jumped so high that Mir Mannu could not control it. He fell down, and his feet got entangled in stirrip. Mir Mannu’s cries further scared the horse and it ran faster. It was dragging Mir Mannu and none could stop it. Mir Mannu was badly injured and died in the forest.

Mir Mannu’s tragic and sudden death had emboldened the Sikhs and they were settling in their villages. A group of Sikhs, under the command of Baghel Kaur, attacked the Lahore camp at midnight, killed twenty-five enemy soldiers who were unprepared, and got the captive ladies released and escorted them to a safer place.

After Mir Mannu’s death, his queen invited Ahmad Shah to help her and capture the Sikhs. At this time, Baghel Kaur was living in her village along with her four-year old son and her husband. She wanted to save the ladies who were forcibly being taken to the camp. She asked her husband to take the child and leave for the forest. She herself started to rescue the ladies being taken forcibly by the Muslim soldiers. She saw one such lady who was being taken to the camp, but Baghel Kaur did not slip away. All of a sudden, she injured with her spear the two soldiers who were taking the lady, but she was caught by their companions. Now she herself was a captive with the other ladies in the camp.

Every lady in the camp was given a piece of bread. Some injured and hungry ladies were lying half-dead on the ground and their children were crying for food. Baghel Kaur gave her own piece of bread to the crying children and she remained hungry. The ladies in the camp were whipped, insulted, and taunted by the soldiers so that they might embrace Islam to get rid of this hell. Baghel Kaur protested against ill treatment, but she was ordered to grind wheat for the whole night without rest.

At midnight, the camp-in-charge sent for Baghel Kaur, but she refused to move out. The drunken soldier caught her by the wrist and dragged her. She took courage and slapped the soldier. She took his sword, which was tied to his belt, and injured him. The other ladies came to her help and the soldier had to run away. In the morning, all the ladies were assembled at one place, and the camp-in-charge told them that anyone who agreed to marry a soldier of her choice would be set free and allowed to lead a happy and prosperous life. Baghel Kaur stood up and said that none would agree to be converted as their own religion was dear to them and they would die rather than lead an immoral life of a coward. Her bold and frank talk made the camp commander speechless.

She was taken to a pillar so that her hands should be tied and then whipped to death.On her way to the pillar, she took courage, pushed the soldier who was taking her to the pillar and snatched his sword. Now the whole camp was surrounded by the other soldiers and many ladies were murdered. Baghel Kaur fought bravely, but was killed by armed soldiers who were surrounding her. Next day, about 8000 Sikhs attacked the camp at midnight, killed the camp commander and freed the captive ladies.