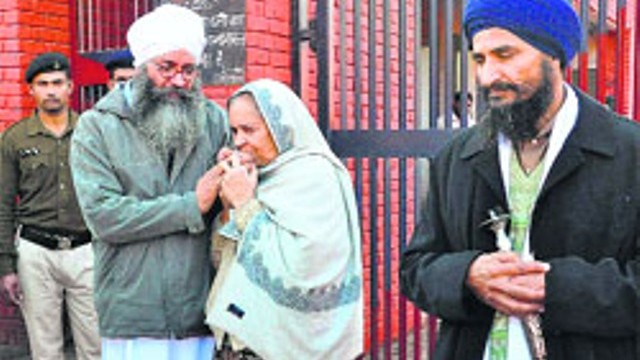 Gurmeet back in Burail Jail

Comments Off on Gurmeet back in Burail Jail 349 Views

Mohali, Punjab: On completion of his 28-day parole period, Sikh detainee Gurmeet Singh returned to the Burail Model Jail, Chandigarh, this evening. An accused in the Beant Singh assassination case, he reached the jail at 3 pm. He was accompanied by his mother Surjit Kaur, sisters Manjit Kaur and Varinder Kaur and brother-in-law Bhupinder Singh.

stepped inside the jail in the presence of the AIG, prisons, Chandigarh, Balbir Singh Dhol, at 4.30 pm.

Talking to The Tribune, Gurmeet Singh said he wanted to return to the

mainstream. “I am looking forward to my premature release. Except for paying obeisance at the Golden Temple in Amritsar, I remained at my house in Patiala. I did not violate any terms of the parole,” he said.

Gurmeet Singh was released on parole on December 25, 2013, for the first time since his conviction in 2007.

Previous: SGPC to use latest technology to preserve Sikh scriptures
Next: Akal Takht chief must keep his word: Khalsa