Comments Off on Gurdwaras illuminated to celebrate Gurpurb 787 Views

Jalandhar, Punjab: On the occasion of the Parkash Utsav of Guru Nanak Dev, a nagar kirtan led by the Panj Piaras started from Nirmal Kutia. During the Gurpurb celebrations today, devotees partook of langar arranged by various religious groups.

It was for the first time that celebrations were marked with special facilities, which included large-scale parking and temporary toilet arrangements, to facilitate the devotees.

There was special deputation of sewadars by environmentalist Balbir Singh Seechewal.

Seechewal expressed his concern on the issue of water in the state as well as the Kala Sanghian Drain, which is being polluted.

Performing the kar sewa at the Bein for the past many years, Seechewal said while the Bein was being polluted on the one hand, on the other hand, rampant burning of paddy was polluting the air.

Seechewal appealed to the devotees to pick up all polythene bags falling on the way while walking along the banks of the Bein. The procession of devotees paid obeisance at Gurdwara Ber Sahib, Gurdwara Hatt Sahib, Gurdwara Bebe Nanki, Gurdwara Sant Ghat and finally reached Nirmal Kutia.

Gurpurb celebrations in the city were also marked with great fervour.

Grand celebrations were seen at the Model Town Gurdwara where more than 20,000 people partook the langar.

While Shri Guru Singh Sabha Gurdwara at Model Town was decked up in colourful lights, the sewa for the sangat was performed by students and staff of Guru Amar Das Public school as well as the gurdwara sewadars.

With the city decked up throughout the day and lights gleaming in the streets in the evening, the fervour of Gurpurb was well visible in the town even as most buildings and gurdwaras were decorated with colourful lights. 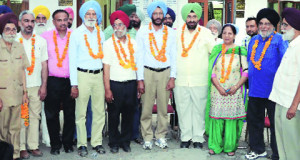