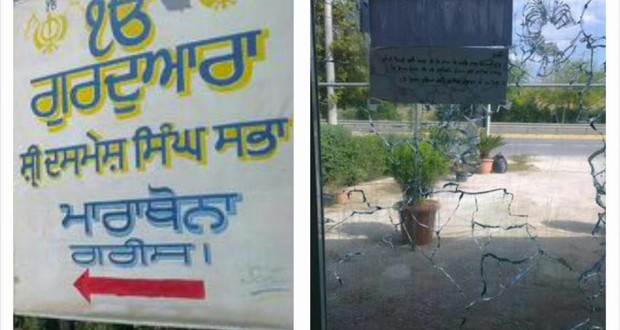 Comments Off on Greek media report on Gurdwara attacks of 21 September 2014. 1,166 Views

Sikh Gurdwara shot at in Marathon

Around 3.15 in the morning on Sunday, September 21, a rural black Toyota exited the Sikh Gurdwara in Marathon, climbed the sidewalk and stopped just behind a bus parked at night on one side of the courtyard.

Then, as per the security camera, the vehicle drove back, reached the other side of the courtyard and restarted slowly forward. From the window of the vehicle, the passenger fired five consecutive shots from a suspected automatic weapon, which pierced the glass windows across the length of the Gurdwara, tore through the curtains and struck the opposite interior wall, leaving a deep scar.

The three people who slept in the room woke up fearful of the sound of gunfire and alerted the police. It was the second attack against the Sikh community that night. About 45 minutes earlier, unknown assailants had broken the glass front of the Gurdwara in Kato Souli, a few kilometers away.

The same day, the Sikh Channel TV crew, a channel watched by numerous Sikhs in England, arrived in the area and extensively covered reports of the attacks and the life of the community here.

“If someone has a problem with us, let us come to talk to us face to face, to find the solution. But not to attack the Gurdwara. God is one for all the world, and your religion and ours,” he said yesterday Mr. Singh, hours after the Sunday morning service, where the attendance was down – about half as many families were afraid to go to Gurdwara.

President of the Gurdwara stated: “The Indians are quiet people. We have not given rise to noise. We deal with our work in the fields, then go home. We have not threatened anyone. There are two statues of Sikh soldiers, one in Thessaloniki and one in Paleo Faliro, in honour of the Sikhs who fought on the side of Greece in World War II. When the area burned in the fires in 2007, our community was able to raise 3,000 euros to help the fire victims. We live in peace with the Greeks”.

Other attacks –
About a thousand members of the Sikh community reside in the area, with another 1000-2000 throughout Greece, although the numbers have reduced since the last crisis. Two years ago, there were two other attacks on Sikh Gurdwaras: one bullet pierced the glass front and back of the Gurdwara in Marathon and a bottle filled with gasoline was thrown inside the Sikh Gurdwara in Taurus.

Then, for the next few months, the police had put a permanent guard outside their Gurdwaras. Today, as we inform ourselves, the commander of the department told them that Marathon can provide only two or three patrols on Sundays.

According to information from the police headquarters, the case was in the last days with the Service Response Racist Violence team.