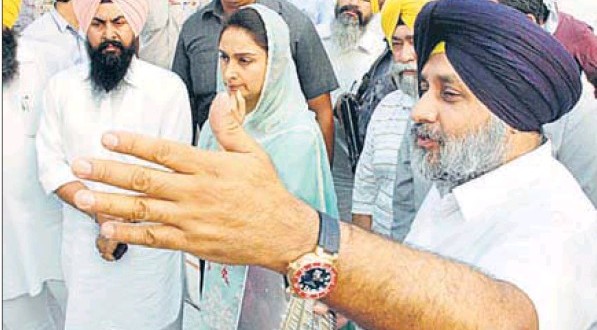 Comments Off on Golden Temple plaza to become functional by Diwali: Sukhbir 746 Views

Amritsar, Punjab: Reviewing the progress of the ongoing construction work of the Golden Temple plaza, Punjab deputy chief minister Sukhbir Singh Badal on Tuesday said it would be dedicated to the devotees on Diwali.

“The work has reached an advanced stage and the ` 78-crore project will be ready by Diwali,” he added.

Visiting the plaza site, Badal asked the authorities to ensure its completion before the Diwali as a large number of devotees visitGolden Temple  to pay obeisance on the festival. He directed the officers concerned to conclude the interior decoration and beautification work of the plaza.

He also asked officials to take steps to reduced congestion around the plaza by strictly prohibiting the entry of vehicles towards the shrine.

Badal also took a note of congestion on main roads of the city due to pushcarts and directed officers of the municipal corporation to remove all ‘rehris’ selling fruit and vegetables along roads. He also asked them to initiate cleanliness process of roads, streets and other places only during the night with heavy machines to avoid hindrances at day time.

“This project will give a unique and traditional shape and look to the whole passage with world-class landscaping, fountain, trees and beautification. The electricity poles at the passage should also be removed,”

he added.
APOLLO HOSPITAL IN CITY

On the proposal of setting up a Apollo Hospital in the city, Badal asked the district administration to identify an appropriate chunk of land so that physical work on this project could be initiated at the earliest.

He said with this project, the holy city would become a hub of healthcare with the availability of world class treatment facilities. He also directed the administration to engage the services of world class companies for landscaping of the entire city, roads, roundabouts and other prominent places so it could be developed as main tourist place in the country. He also called for preparing an appropriate design of the new circuit house.

Issuing strict directions to all officers, Badal said laxity would not be tolerated and irresponsible officers/officials would have to face flak as giving the Holy City a new look was his top agenda.

Previous: Preparations on for 3 Sikh events
Next: PHOOLKA FOR CHARGESHEET ON 1984 GENOCIDE