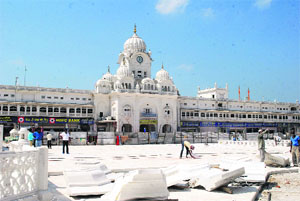 Golden Temple plaza to be thrown open to devotees soon

Amritsar, Punjab: After breaching its deadline more than once in the past, the Golden Temple entrance plaza’s first phase is fast inching towards completion and is expected to be thrown open to the devotees by Diwali next month.

According to sources, the work on the flooring of sprawling open space right in front of the main entrance of the holy shrine is almost complete. Besides, the work on installing sandstone grills on the walls around the open area is underway on war footing, which is apparently aimed at lending it a heritage look. The project was kicked off in May 2011 and was supposed to be completed by Diwali last year but it turned out to be a massive exercise as the agencies engaged in it had a tough time to deal with mesh of underground sewers and water pipes. It took them significant time to clear it all and prepare the ground for finally starting the work on the project. The plaza is spread over an area measuring 8,250 sq metres and many of the craftsmen engaged in the work hail from Rajasthan having expertise in it. Deputy CM Sukhbir Badal is personally monitoring the project.

The authorities had partially opened the plaza for the devotees on the occasion of Diwali last year which had eased the congestion on the main entrance of the holy shrine. The sprawling area also facilitates seating arrangement for the pilgrims in the form of benches built beautifully around the trees planted in the plaza. Besides, the new ‘jora ghar’ (shoe-keeping facility) and ‘gathri ghar’ (baggage room) were also been opened.

In the second phase of the plaza, a number of facilities are to come up in the basement. Among the underground facilities are a state-of-the-art interpretation and information centre for tourists, VIP lounge, bank, ATM, airlines and railway inquiry, a multipurpose hall, security and services area, toilets and other public conveniences. As there is a lot of VVIP movement at the Golden Temple, the plaza will have a separate lounge to accommodate dignitaries and their entourage. An auditorium with a seating capacity of 100-150 persons would be built so that a visiting dignitary could address the media. At present there is no proper place in the Golden Temple Complex where mediapersons can interact with the VIPs. The plaza has been designed in view of the fact that there are points of high congregation of people around the shrine and they have to be provided with safe and convenient access, facilities, pedestrian movement and congregation space. The holy shrine is visited by thousands of devotees from across the globe everyday and their number crosses the one lakh mark on special occasions like ‘gurpurab’.