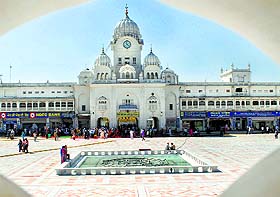 Comments Off on Golden Temple plaza opens on Oct 22 1,481 Views

Amritsar, Punjab: Chief Minister Parkash Singh Badal and Deputy Chief Minister Sukhbir Badal will inaugurate the Golden Temple entrance plaza on the eve of Diwali, the preparations for which are underway on a war footing.

Deputy Commissioner (DC) Ravi Bhagat said the Badals would reach Amritsar on Wednesday and the inaugural function was scheduled to start at 6.30 pm. “The preparations are underway for the ceremony even as finishing touches are being given to the plaza,” he said.

The DC said “ardaas” would be performed during the ceremony and subsequently, the plaza would be thrown open to devotees. He said they had already carried out a trial run of the new fountain and lights. He said the work on the three gates of the plaza was at the final stage.

Officials said it would take another year for the completion of the second phase of the project. They said the opening of the first phase of the plaza would facilitate easier movement of devotees. Tight security arrangements are being made for the ceremony in view of the fact that it would take place just a day before Diwali, which witnesses a huge rush of devotees in the holy city. The Golden Temple entrance plaza would facilitate a sprawling open space spread over 8,250 sq m right in front of the holy shrine’s main entrance to pave the way for easy and hassle-free movement of devotees. The sprawling area also facilitates seating arrangement for pilgrims in the form of benches put up around trees in the plaza.