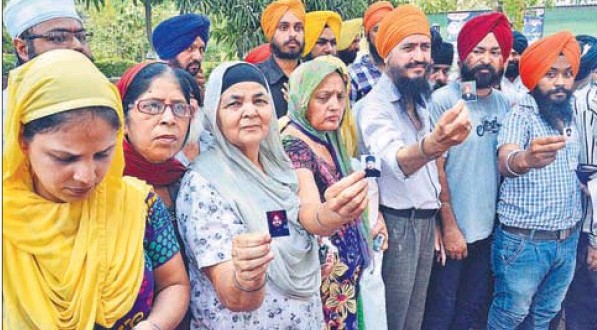 Amritsar, Punjab: Making it clear that the perpetrators of the violence that took place on June 6 inside the Golden Temple complex will not be spared, the Sikh clergy have directed the management of the shrine to review the role of each of the 21 people arrested by the police in connection with the incident.

The direction to the Golden Temple manager, came after parents and relatives of nine of the 21 arrested men met Akal Takht jathedar Giani Gurbachan Singh here on Sunday.

The parents claimed before the jathedar t hat that their wards were picked up by the police from various parts of the city and not from the shrine.

Mohinder Singh, the father of Satinder claimed that his son was picked up from the Ram Bagh area while he was purchasing some house hold items.

“My son was nowhere near the Golden Temple and did not even go to the shrine on June 6 and yet has been accused of indulging in violence,” said Surinder Singh, father of Manjit Singh.

Later while addressing the media, the Jathedar said that the Golden Temple manager has been asked to once again review the CCTV footage of the incident to scrutinise the role of each of the 21 people, who had been arrested.

“If the claims of the parents are true then efforts will be made to get their wards released.No innocent should be punished while those involved will not be spared as they have violated Sikh tenets,” the jathedar added.

The parents also presented a joint memorandum to t he jathedar seeking the release of their wards from police custody. A similar memorandum has also been handed over to Amritsar police commissioner Jatinder Singh Aulakh.

Meanwhile, an SGPC employee, when contacted, told HT that the SGPC had caught and handed over 11 people to the police on June 6. “We are not aware from where the others were arrested,” he added. On when would action be taken a g ainst t he guilty, the jathedar said: “I am yet to receive the SGPC inquiry committee report. Action will be taken once I get the report.”

The SGPC has formed a 5-member panel to inquire into the violence that broke out during the 30th anniversary of ‘Operation Bluestar’ which was observed in the Golden Temple complex. The violence left 12 people injured, including seven SGPC employees.

SGPC chief Avtar Singh Makkar held SAD (Amritsar) chief Simranjeet Singh Mann responsible for the violence. On the other hand, Mann has claimed innocence and rejected the inquiry panel formed by the SGPC on the direction of the Akal Takht Jathedar.