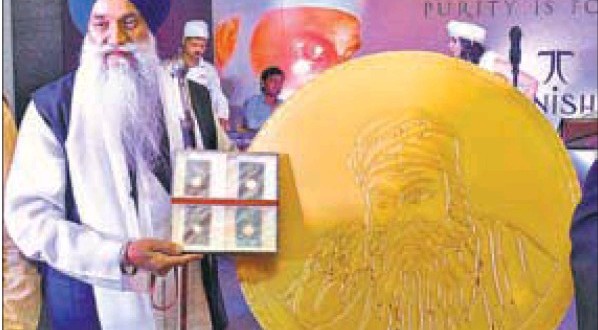 Comments Off on Gold coin unveiled ahead of Gurpurb 466 Views

Amritsar, Punjab: Paying tributes to the first Sikh Master Guru Nanak Dev on his birth anniversary being celebrated on November 6, a limited edition of gold coins with Sri Guru Nanak Dev picture engraved on it was launched in the holy city by a jewellery firm on Monday.

Unveiling the coin, Akal Takht jathedar Giani Gurbachan Singh said, “On the pious occasion of Gurpurb of Sri Guru Nanak Dev, a very creative and a thoughtful initiative has been taken. Unveiling a coin with a picture of the guru is itself an idea worth praise. It is truly said that a picture speaks louder than words. In fact, a picture can say more than thousands of words”.

On the occasion, Amritsarbased singer Hargun Kaur sang Gurbani hymns which was appreciated by the jathedar and others present on the venue.