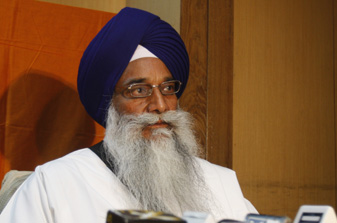 Kaithal, Haryana: The Haryana Sikh Gurdwara Management Committee (HSGMC) on Wednesday claimed that a huge amount of gold and cash was missing from Nada Sahib Gurdwara in Panchkula. “We have information that cash and gold was lying there till some days back. But now it’s missing,” said HSGMC president Jagdish Jhinda while addressing mediapersons at Chevin and Nauvin Patshahi Gurdwara at Cheeka, Kaithal.

The real motive of SAD and SGPC leaders, who had come to Haryana, was not to protect the shrines. They had come to take away gold and cash from gurdwaras,” alleged Jhinda. “These leaders knew that they would ultimately lose control of management of gurdwaras in Haryana. So they have stooped to this level,” claimed Jhinda. The HSGMC chief also claimed that a huge quantity of cash has been withdrawn by the SGPC from many bank accounts of the committee in Haryana. When asked if the HSGMC would take any action if it succeeds in getting possession of gurdwaras, Jhinda said: “SGPC- SAD workers have destroyed financial records. Without any data, it will be very difficult to expose SGPC’s illegal acts.

Money has been withdrawn from bank accounts, but hasn’t reached gurdwaras. The entries have not been made in officials books. It clearly shows donations worth lakhs are being diverted outside Haryana,” alleged Jhinda. Regarding the formation of a five-member panel for amicable solution to the ongoing tussle, Jhinda claimed both SGPC and SAD have not conveyed anything to them so far.

Previous: New Sikh Free School Plan Put on Hold for a Year In Bradford UK
Next: SAD (Badal) appears to have forgotton its promise of formation of SIT on Nov. 1984: Advocate Phoolka