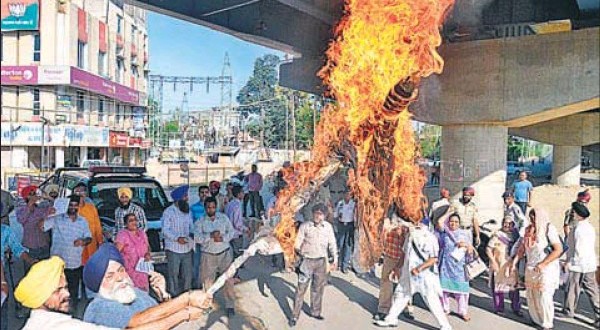 Leading the protest, members of the genocide Victims Relief Committee marched towards the election office of Captain Amarinder Singh to sta ge a protest. As they were stopped by the police near the of fice, the committee members, led by their president Kuldeep Singh Bhogal, staged a protest there itself. They burnt Amarinder’s effigy and raised slogans against him and Tytler.

He further said, “Capt Amarinder seems to have lost control over his mi n d and is playing with our sentiments. The Congress has been doing this for years and now Amarinder has again repeated it. He has no right to contest from Amritsar”.

DSGMC SLAMS AMARINDER
Terming Amarinder’s statement on Tytler as shocking, the DSGMC reacted strongly and said that his r e mark s clearly indicate the stand of the Congress party on 1984 genocide.

Addressing media persons at a press conference, DSGMC chief Manjit Singh GK, said, “The statement of Capt Amarinder Singh clearly shows his mindset and that of the Congress”.

GK alleged that Amarinder is “frustrated over his impending defeat in Amritsar and he is making such statements to affect the voting pattern”.

He further said, “There is anger in Sikh community and on Monday a protest will be held outside the residence of Sonia Gandhi and also the Congress headquarters in Delhi. The protest will be led by the genocide victims and the Akali Dal will support it”.

Senior BJP leader RP Singh said, “Capt Amarinder thinks he is ‘Raja’ of the nation and he can give clean chit to anyone. Sikhs are fighting for justice for years and Amarinder by making such a statement has hurt their feelings”. State BJP vice president Rajinder Mohan Singh Chinna and Delhi SAD leader Avtar Singh Hit also criticised Amarinder for his statement on Tytler.