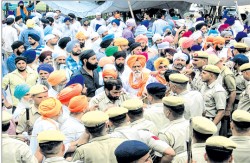 On the other hand hundreds of armed personnel of SGPC task-force and supporters of Punjab’s ruling party Shiromani Akali Dal (Badal) are camping inside the Gurdwara Sahib to challenge any attempt to take over the control of Gurdwara Shaib with force. The situation turned tense yesterday (August 05) at around 2 pm when a groups of about fifty youth led by youth wing president of HSGMC, Amrinder Singh, tried to break-away the barriers placed by the police.

This resulted in a tense scuffle between HSGMC men and the police. But situation was soon brought under the control. Meanwhile, HSGMC (ad hoc) President Jagdish Singh Jhinda again appealed that the HSGMC supporters to maintain the peace.Sincere Sikh circles are extremely worried about the mounting tensions at Haryana’s major historic Gurdwara Sahib.