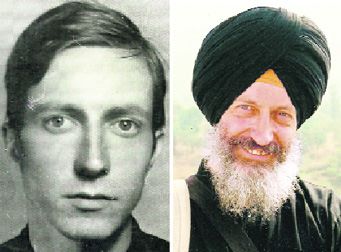 Chandigarh, Punjab: He renounced his French citizenship for embracing Sikhism, came to India, married here and settled in Punjab. Living here since past many years, he is disappointed with the current politicians of Punjab who, according to him, have completely diverted from the path shown by the Gurus.

Darshan Singh Rudel, 57, a French national, earlier known as Michael Rudel, had converted to Sikhism and married a Sikh woman. Now settled at Nurpur Bedi in Ropar district, Rudel is doing organic farming for the past 17 years.

Rudel had requested a French court in 1995 for changing his name from Michael Rudel to Darshan Singh Rudel, which was declined. Thereafter, he renounced French citizenship and became a UK national, which had issued him a passport in his new name — Darshan Singh Rudel.

In 1997, he became an amritdhari (baptized) Sikh at Anandpur Sahib – the place of birth of Khalsa — and married Malvinder Kaur, who teaches English at a college in Nangal. The couple is living at Nurpur Bedi since then. He strictly follows the tenets of Sikhism and has even written outside his house that “drunkards are not allowed to enter.”

Darshan, a dedicated Sikh missionary with profound knowledge of “gurbani” and “gurmat”, said that Sikhs were known for their honesty, integrity, hard work and bravery. But today’s politicians have created an environment in Punjab where all such virtues are evaporating, he said.

Harvesting wheat at his fields, Rudel told TOI, “Politicians in Punjab are confined to making money and fighting each other. They don’t focus on larger social issues of the state and have almost forgotten the concept of ‘sarbat da bhala’ (welfare of all). Today, Punjabis have stopped working in farms, become drug addicts and distanced themselves from hard work and have become money-centric.”

He further felt that politicians in Punjab have stopped bothering about pollution in the rivers of the state and are promoting multinational companies (MNCs) due to which people of the state are forced to consume poison by using chemical fertilizers and pesticides for their crops.

“Youth from Punjab, once considered a nursery for defence forces since British era, have stopped joining the Army and politicians are not even bothered about such issues,” he stated.

Rudel, who uses only organic methods at his farm, said Punjab needs “genetically modified corruption-free politicians”, who are nowhere in sight.

Darshan had to face the wrath of policemen in Delhi in 1991 for sporting a turban while coming to India. He was subjected to interrogation for several hours to ensure that he was not a militant or sympathizer of Sikh hardliners. He had also written to the then Union home minister, Shankar Rao Chavan that all Sikhs should not be treated as militants. However, no reply was ever received from the minister, he said.

Previous: Badal did little for genocide-hit: Sarna
Next: Fake encounter of Sikh Youth: Parents still prays for son’s return who was taken away by cops