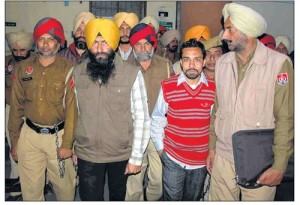 Patiala, Punjab: On 3rd March, the Patiala Session Court Judge Pushvinder Singh, overturned the Police accusation that Bakhshish Singh and three others had planted explosives close to a liquid petroleum gas bottling plant. Bakshish Singh, Jasvir Singh, Harjit Singh and Pargat Singh have now, all been acquitted in this case.

The Police first registered this case in January 2010 under Section 3 and 4 of the Explosives Act. The charges were made on the say-so of Sher Singh, the Chief Manager of the bottling plant, who claimed to have “received a report that 3 or 4 men were seen loitering next to a drum, against the wall of the plant”. The Police then added that they found two wires attached to this drum and had to call in the bomb disposal unit of Jullandhar.

Mr Sodhi, lawyer for the defense, stated that he had said from day one that these four men were being framed in highly imaginative story, spun by the Police.

It is worth noting – we often find that numerous cases are placed on Sikh political prisoners, to keep them behind bars for decades. This is certainly the case with Bakshish Singh who has numerous other cases pending. SOPW has been supporting Bakshish Singh and others throughout their ordeal and needless to say we will continue to do so.