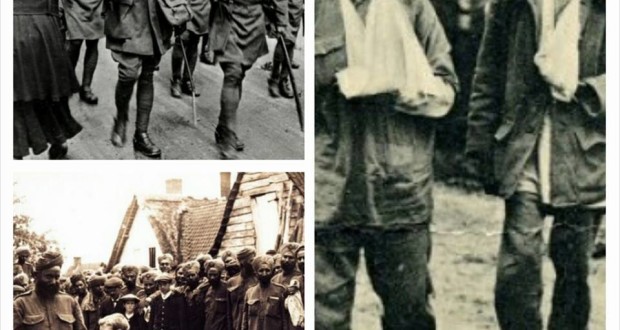 Comments Off on First World War – Exhibition marks contribution of Sikhs during the Great War. 781 Views

UK: In the centenary year since the outbreak of the First World War, many organisations have staged events to mark the contribution, and in some cases the sacrifices, made by many who fought in the conflict.

The remarkable but largely forgotten experiences of Sikh soldiers are being commemorated in an ongoing exhibition, with many of those remembered thought to possibly have descendants living in the East End.

Sikhs made up nearly 20 per cent of the British Indian Army at the outbreak of the war and, with a large Sikh population living in the borough, Amandeep Madra, chair of the UK Punjab Heritage Association, believes that many will be unaware of their ancestors’ roles in history.

“There is hardly a Sikh family in the UK that doesn’t have a military connection in their family history,” she explained. And given the large Sikh community in Newham we’re sure that this exhibition is of direct relevance to many of them.

“We’re keen to help them research their own family’s story and build up a picture of that person, where they fought and what they did. With their help we’ll create a database and other outputs which will commemorate their service for always.”

The exhibition at the Brunei Gallery at the School of Oriental & African Studies, titled Empire, Faith & War: The Sikhs and World War One, runs until September 28 and is the launch event of a three-year project to reveal the untold story of how one of the world’s smallest communities played a disproportionately large role in the “war to end all wars”.

Although they made up just one per cent of the population of British India at the time, Sikhs fought and died alongside their British, Indian and Commonwealth counterpart in the blood-soaked trenches of the Somme and Gallipoli to the deserts and heat of Africa and the Middle East, to serve the greater good, gaining commendations and a reputation as fearsome and fearless soldiers.

Amandeep hopes the exhibition, which is led by UKPHA and supported by the Heritage Lottery fund, will help remind the world of the often undervalued Sikh contribution.

“This is British history and a story that helps explain much about modern Britain as well as filling in a tragically missing piece of First World War history,” she said.

“The British Indian Army’s contribution was actually greater than the better-known efforts of the white commonwealth countries of Australia, Canada and New Zealand put together. The non-white Empire’s efforts have been largely forgotten and their heroism and sacrifices omitted from mainstream narratives or left as somewhat forlorn footnotes of history.

“And yet men from British India in particular ensured that the Western Front wasn’t lost in those vital first months, and then went on to fight the war’s forgotten fronts in Mesopotamia, Arabia, Palestine, North Africa and beyond. Their contribution has never adequately been recognised or even told.”

The charity hopes to bring a pop-up touring version of the exhibition to east London in the future and is working with Redbridge Museum to make it possible.

In the meantime it wants to hear from anyone whose relatives served in the First World War.