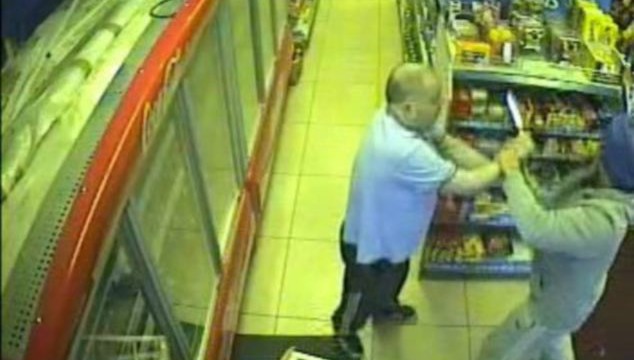 UK: This is the moment a shopkeeper wrestled a racist knifeman who tried to murder him in front of horrified customers and crying children in broad daylight.

The 46-year-old shopkeeper tried to defend himself with a stool before grabbing Doran’s arms.

Eventually, at 9.12am, passers-by stormed the shop in Burnley, Lancashire, and Mr Singh calmly guided the 45-year-old out.

Doran, who was charged with attempted murder, has now been sent to a secure mental hospital indefinitely after Preston Crown Court heard he was suffering from paranoid schizophrenia.

Mr Singh, owner of Singh Stores, said: ‘There were children in the shop crying and I was telling them to get out, I would sort it out.

‘But he was saying he was going to kill me, shouting racist stuff and telling me to go back to my own country.’

But it was some time before passer-by Warren Parker was able to intervene in the early-morning attack.

Speaking about his ordeal, Mr Singh said he survived because Doran did not tried to stab him straight away, after bursting through the shop’s door just after 9am on May 15 last year.

Instead, Doran ran round the counter, giving Mr Singh time to defend himself.

He also praised the staff from Cohen’s Chemists next door who alerted the police and gathered passing motorists and pedestrians to intervene.

Judge Anthony Russell QC told him he will not be able to leave a secure mental health unit without the approval of the Home Secretary.

The court heard that he had four previous convictions including a caution in 2002 for causing grievous bodily harm.

Psychiatrist Dr Lucy Baron said: ‘He does have a history of violence in mental health settings. That’s the reason he hasn’t had many convictions over the years.’

After the case, Det Chief Insp Sion Hall praised Mr Singh’s ‘quick thinking’ and the bravery of the shopkeeper and Mr Parker.

He said: ‘Mr Singh and his family were doing what they always do on that dreadful day in May, serving the community in which they work and live.

‘It is only through the quick-thinking and bravery of Mr Singh and an extremely brave member of the public that we weren’t dealing with fatalities.

‘This whole experience has been a particularly traumatic one for Mr Singh and his family and the sentence passed down comes as a welcome conclusion to the matter.’