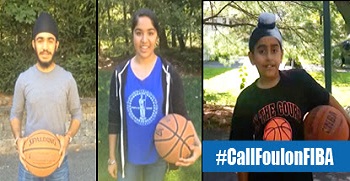 New York City, USA: In a news release the US based civil rights organization the Sikh Coalition has information that [i]gnoring protests from around the world, the International Basketball Federation (FIBA) decided yesterday (August 28) to delay a decision on whether Sikh athletes can wear turbans. No deadline was given for addressing the issue. As a result, FIBA’s turban ban remains in effect, and turbaned Sikh athletes remain vulnerable to discrimination. The Sikh Coalition has written a protest letter to FIBA, but we need your support to move this campaign forward.

The Sikh Coalition has expressed shocked over FIBA’s arrogance and insensitivity. It has appealed to the turbaned Sikhs and their friends throughout the world to participate in Sikh Coalition’s #CallFoulonFIBA video campaign. “Several Sikh Coalition supporters have already shared their videos on social media, and we urge you to join this campaign to keep the pressure on FIBA. When sharing your video, please be sure to use the hashtags #CallFoulonFIBA #LetSikhsPlay #SikhCoalitionFullCourtPress” a release by the US based civil rights body reads.

Why This Campaign Matters? Stressing upon the imporatnt of the campaign the Sikh Coalition notes: [a]lthough sports are designed to break barriers, FIBA is standing on the wrong side of history by creating barriers for religious minorities. In 1936, Jesse Owens—an African American—shattered Hitler’s dream of a master race by winning several gold medals during the Summer Olympics. In 1947, Jackie Robinson—an African American—broke racial barriers in American baseball. In 2014, as FIBA attempts to shut religious minorities out of professional basketball, it is the Sikh community’s turn to make history.