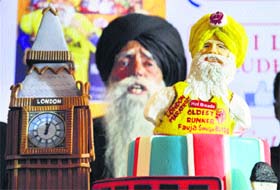 Ludhiana, Punjab: “Drugs have ruined the youth of Punjab. Look at them today, they are busy working on their gadgets but cannot come out of their homes for a run,” said 103 -year-old marathon runner Fauja Singh while signing his autobiography written by Khushwant Singh at Ludhiana today. He was in the city at Hot Breads where he also cut a cake named after him.

With his distinctive flowing grey beard and the traditional Sikh headgear that has earned him the nickname “the Turbaned Tornado,” he recalled his childhood. He has been a star entrant at marathons all over the world.

Singh said that he was unable to walk until he was five due to weakness in his legs. “It took me another five years to gain strength and become strong. When I was 10-year-old I began leading a normal life,” he recalls.

“Punjabis are known to be gluttons and the time has come when they should pick up their running shoes” he said. Giving a peep into his diet routine, Singh said, “Before I leave home, I have plain yogurt and two glasses of water. Lunch is one chapatti and daal with yoghurt. At home, I have whatever is being made. If I don’t like what my family is eating then I eat toast with jam or honey on it. And before I go to bed I have a glass of warm milk. I also have ginger curry at least once a week which cleanses my body”.

Fauja admits to one guilty pleasure that he indulges in – shopping. “Though I am an old man now, I am still very particular about my clothes and style. I often end up spending on shoes and track suits,” he says candidly.

“The Turbaned Tornado cake is our humble acknowledgement of the marathon feats of Fauja Singh who has inspired young and old alike worldwide to stay fit ” said Harjinder Singh of Hot Breads, who organised the evening which saw a large number of Ludhianvis clicking pictures with the “young old man”.

Very few people know that Fauja Singh started running at the age of 89. He has been felicitated by Queen Elizabeth on turning 100. The Guinness Book of World Records has not approached Fauja as he does not have a birth certificate.