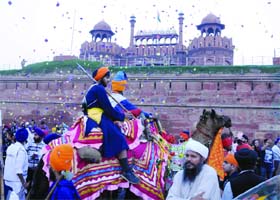 Comments Off on Fateh Diwas held in memory of Baba Baghel Singh 1,093 Views

Addressing the congregation at the Samagam, the Akal Takhat chief had appealed to the Sikh community to join the Fateh Diwas procession to demonstrate the power of Khalsa.

The DSGMC president Manjit Singh GK said the Fateh Diwas was organised in memory of Baba Baghel Singh who had conquered Delhi during the reign of Mughal King Shah Alam in March 1783 and unfurled a Nishan Sahib at Red Fort.

He said that Baba had conquered Delhi on March 11, 1783 that was known as “Fateh Diwas” in the history of Sikh community.

This function has been organised for the first time, DSGMC spokesman Parminder Singh said.

The procession began from Tis Hazari to Red Fort via Fatehpuri and Gurdwara Sheeshganj Sahib.

It consisted of Nihangs on horses and elephants.

The DSGMC spokesman said that this is being done to acknowledge the good work done by Baba Baghel Singh for the community and to give information of Sikh history to the youth of the community.