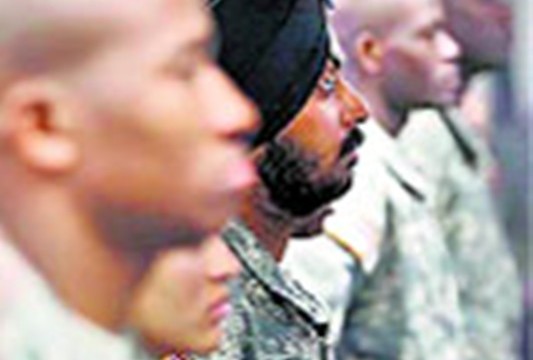 Comments Off on Faith factor: US military eases regulations on turbans, beards 593 Views

Sacramento, US: The US military has eased its uniform rules giving troops greater freedom to wear turbans, head scarves, yarmulkes and other religious clothing. The policy is mainly expected to affect Sikhs, Muslims, Jews and members of other groups that wear beards or articles of clothing as part of their religion. It also could affect Wiccans and others who may obtain tattoos or piercings for religious reasons.

“The new policy states that military departments will accommodate religious requests of service members unless they have an adverse effect on military readiness, mission accomplishment, unit cohesion, and good order and discipline,” Pentagon spokesman Lieutenant Commander Nate Christensen said in a statement yesterday.

A service member who wants to wear a beard or article of clothing for religious reasons must seek permission, or an accommodation, from the military. Pentagon previously made only a small number of accommodations to its uniform policy to enable Sikhs to wear turbans.

Approval of the waiver will depend on where the service member is stationed and whether the change would affect military readiness or the mission. Under the new policy, a request can only be denied if it is decided that the needs of the military mission outweigh the needs of the service member. Until now, there has been no consistent policy across the military services to allow accommodations for religion.

Prior to the 1980s, the US armed forces allowed beards in uniform. However, due to a change in regulations, the military put a stop on allowing beards in uniform, except for those who commenced their service before 1986.

As the beard is a requirement, according to the Rehat Maryada, the current regulation, created a regulatory barrier that has kept Sikhs from serving in the US military. Prior to this change in regulation, two Sikhs who served in the US military were Col Arjinderpal Singh Sekhon and Col GB Singh. Currently, three Sikhs Major Kamaljeet Singh Kalsi, Captain Tejdeep Singh Rattan, Corporal Simranpreet Lamba are serving in US Army with hair and turban.

Sikh Coalition, an advocacy group, said: “We are deeply appreciative that the Pentagon established a formal process so that aspiring Sikh American Soldiers and other soldiers of faith can request accommodation of their articles of faith. We are disappointed, however, that the presumptive ban on Sikh articles of faith remains intact. While the policy revisions announced today provide a framework through which Sikh soldiers may seek religious accommodation, we caution that uniform rules barring Sikh service remain intact.”

Since 2009, three Sikh Coalition clients – Major Kamaljeet Singh Kalsi, Captain Tejdeep Singh Rattan, and Corporal Simran Preet Singh Lamba – have received rare and historic accommodations to serve in the US Army with their articles of faith intact, the coalition said in a statement.

“However, their historic accommodations came only through the expending of significant resources from the Sikh Coalition over several years,” it said. The revised Pentagon policy appears to formalise the ad hoc process through which these three clients were granted individualised religious accommodations, while maintaining restrictive appearance regulations that effectively ban Sikh articles of faith.

* The policy is mainly expected to affect Sikhs, Muslims, Jews and members of other groups that sport beards or articles of clothing as part of their religion

* A service member who wants to wear a beard or article of clothing for religious reasons must seek permission, or an accommodation, from the military

Previous: Akal Takht chief must keep his word: Khalsa
Next: Sant Bhindranwale Did Nothing Wrong By Defending The Golden Temple