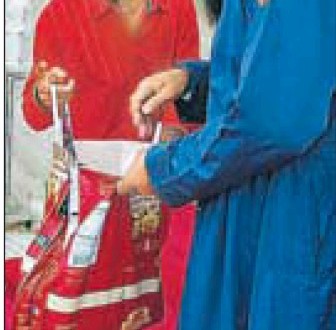 Sources said the Harmandar Sahib manager had received a phone call a couple of days ago, in which the unidentified caller had demanded cash without specifying any amount. After this, the SGPC informed the police and its own security wing heightened vigil.

Although the gurdwara body has been discouraging the carrying of hand bags inside the complex, particularly large ones, SGPC chief Avtar Singh Makkar on Tuesday said the restriction would be enforced strictly.

He added, “We have heightened security as a precautionary measure.”

The SGPC chief said fresh instructions in this regard had been given to ‘sewadars’. Those going for a holy dip can carry small bags, but bigger ones are not allowed, he said.

The hand bags can be deposited in the ‘gathri ghar’ (baggage counter) managed by the SGPC. It is learnt that the gurdwara body has set up an additional ‘gathri ghar’ to accommodate as many bags as possible.

Meanwhile, Amritsar police commissioner Jatinder Singh Aulakh said, “The Harmandar Sahib manager received a call from some person who demanded cash. There was no mention of the amount or any other detail. We are trying to trace the call.”

We are maintaining tight vigil in the area around the shrine, he added

Although there are about 100 CCTV cameras already installed in and around the Golden Temple, the SGPC is now in the process of installing highdefinition cameras (with greater picture clarity).

It is learnt that a couple of HD cameras are already in place, whereas more will be put up at key locations in the complex.