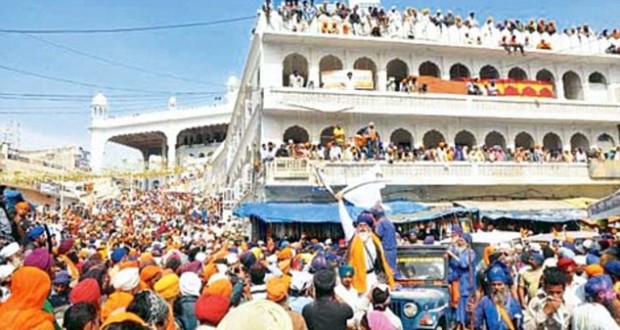 Chandigarh: The Election Commission has banned all political rallies at Anandpur Sahib during the three-day Hola Mohalla festival that began on Saturday, citing rules against “misuse” of religious institutions and occasions for elections. But Punjab’s ruling Shiromani Akali Dal (SAD) still looks all set to go ahead with its rally scheduled for Sunday, as its spokesperson said the party had not received any communication about the EC decision, which was taken late on Saturday evening.

After the poll panel’s decision, even the deputy commissionercum-district election officer of Rupnagar, under whose jurisdiction Anandpur Sahib falls, withdrew permission for all such conferences. While the Congress had already cancelled its rally  the party cited election rules, though poll-watchers blamed it on infighting — the  SAD (Amritsar) led by Simranjit Singh Mann and the Aam Aadmi Party (AAP) were also scheduled to hold rallies that now look set to be cancelled. The buzz was that the AAP rally would be addressed by the party’s national convener Arvind Kejriwal.

Technically, the directions of the EC quoted the Religious Institutions ( Prevention of Misuse) Act, 1988, which says political parties and candidates should be advised to desist from using religious places or occasions for elections. The district electoral officer was asked to bring it to the notice of political parties and candidates immediately; and he issued follow-up directions promptly.

Yet, there was no change in the SAD’s plans. “The party, so far, plans to go according to the schedule as we have not received any communication from the EC,” said SAD spokesman Dr Daljit Singh Cheema, adding, “How can the audience of thousands of people be turned back?”

He further added that the SAD had been seeking permission for the rally since March 8, but there was no response from the EC. “Let’s see what happens tomorrow (Sunday) morning,” Cheema said.

Earlier in the day, too, the SAD had lodged protest with the commission for delay in deciding on permission. A delegation of the SAD met Punjab’s chief electoral officer (CEO), VK Singh, and argued that Hola Mohalla “is a socio-religious occasion” and it was a “historical fact” that the SAD had held such conferences on this occasion since decades. “Socio-religious fields have never been the domain of the model code of conduct,” it had argued.

In its memorandum to the CEO, SAD leader Prem Singh Chandumajra and spokesman Cheema had said the party had already taken a ground on rent from the Shiromani Gurdwara Parbandhak Committee (SGPC) after paying rent.

The SGPC president, Avtar Singh Makkar, had also denied that the gurdwara body was making any arrangements for the SAD, which is also the ruling party in the SGPC. He had further backed the SAD’s argument that the rally ground was not part of any gurdwara but was actually a parking lot, and said the SGPC had charged 11,000 as fee for its land.