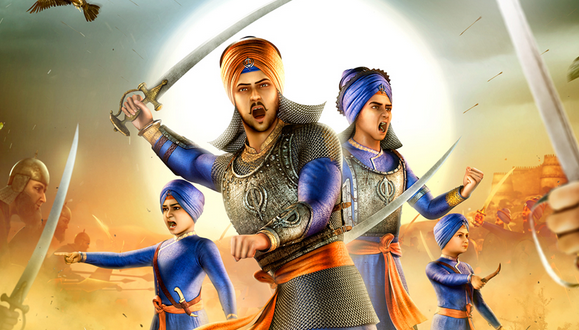 Comments Off on DSGMC for waiving tax on ‘Char Sahibzadas’ 2,000 Views

New Delhi: The Delhi Sikh Gurdwara Management Committee (DSGMC) has demanded a nationwide tax waiver on the picturisation of ‘Char Sahibzadas’, an animation movie on the life of four sahibzadas of the tenth Guru Guru Gobind Singh.

In a letter written to Arun Jaitley, Union Finance Minister also holding the charge of Union Information and Broadcasting Ministry, DSGMC president Manjit Singh GK said that Guru Gobind Singh and his entire family sacrificed lives for peace and humanity and laid the foundation for a secular India. The contribution of martyrs for the country cannot be ignored, GK said.

He appealed to countrymen to make their children watch this movie which shows the two elder sahibzadas of the Guru, Baba Ajit Singh and Baba Jujhar Singh who laid down their lives fighting the Mughals at Chamkaur di Garhi. While the two younger sahibzadas Baba Zorawar Singh and Baba Fateh Singh were bricked alive in Sirhind.

“Guru Gobind Singh Ji’s father Guru Tegh Baghadur Sahib was martyred in Chandni Chowk, Delhi. Every citizen of India should be given a chance to witness the contribution of the Sikh Guru and his sahibzadas to the cause of peace and humanity,”