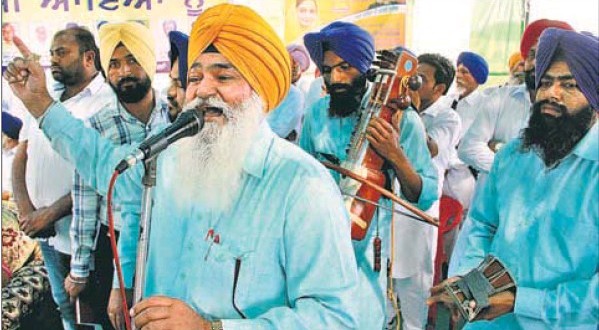 Loosely translated, the verse says, “Prices have touched the sky, people are suffering; but know this you, the beloved daughter- in- law of Indira Gandhi [meaning, Sonia Gandhi], your regime will not stay.” Words aside, the folk flavour is untranslatable, the charm unmatched, though many question the use of such jathas, known to be religious messagecarriers, in politics.

The song was being sung by a jatha before Harsimrat arrived for a public meet at Akalia Kalan village on Thursday noon. For the attendees, besides being entertaining, the jatha reminds them of failings of the UPA regime. The reference to former PM Indira Gandhi is a not-so-subtle attempt to woo voters on the issue of the anti-militant Operation Bluestar inside the Golden Temple under her PM-ship, and the Sikh genocide of 1984 that had taken place after her death.

After using them in past polls too, the SAD has employed dhadi jathas liberally for the campaign here. As candidates often arrive late, these jathas sing and entertain. As soon as the candidate reaches, the jatha leaves for the next destination about an hour before her. “We try to entertain people mainly by singing religious songs and about the history of Sikhism, but also highlight development works carried out by the Punjab government,” said Jugraj Singh Mauji, head of one of the dhadi jathas accompanying Harsimrat. “My jatha was with Harsimrat Kaur in the last parliament elections too, and we also go with her and other SAD leaders during sangat darshan (grievance-redress public meetings) in the constituency,” he added, claiming that being staunch supporters of the SAD the four members “do it for free”.

Another inter nationally renowned jatha reached here on Thursday for SAD’s electioneering. Head Gurmail Singh Diwana said, “Our motive is to keep people busy before the main leader arrives. For that, we prefer to sing religious songs. Sometimes, we also sing songs on the Nanhin Chhaan Foundation (led by Harsimrat) working for stopping female foeticide.”

Diwana claimed his jatha does not attack parties in the songs: “We are religious singers, so people do not expect us to do that.” He also claimed the jatha does not charge the SAD.