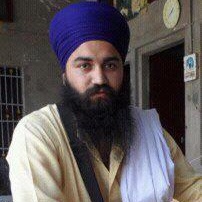 Ludhiana, Punjab: According to some media reports, Bhai Mandeep Singh Kubbe, who shooted Bihari migrant in police custody, has been sentenced to 5 years imprisonment.

It may be recalled that Bihari Hindu migrants had interrupted an Akand Paatth Sahib in August 2012 that was being held at Sri Guru Arjan Dev Ji Gurdwara Sahib, Sahnewal. Dalip Kumar, a migrant Bihari Hindu had attacked the Granthi Singh, and committed the ultimate sacrilege when they forcibly tore off a sacred Ang from Guru Granth Sahib.

Bhai Mandeep Singh from the town of Kubay, near Samrala, had shot Dalip Kumar with his revolver. A case was registered against Bhai Mandeep Singh under F.I.R. 131/12 at Police station Sahnewal under section 307 of Indian Penal Code (IPC).

It is notable that no significant progress has taken place in case related to sacrilege of Guru Granth Sahib ji by Dalip Kumar, which shows that the state and the court is not taking incidents of ultimate disrespect to the Sikh Gurus seriously. The incidents of sacrilege of Guru Granth Sahib has increased in recent years. Bhai Mandeep Singh’s action had sent a strict message to the miscreants.

Previous: Akali Dal-BJP alliance will drown in the river of drugs: Punjab Congress
Next: Litterateur pens books on Panj Pyare