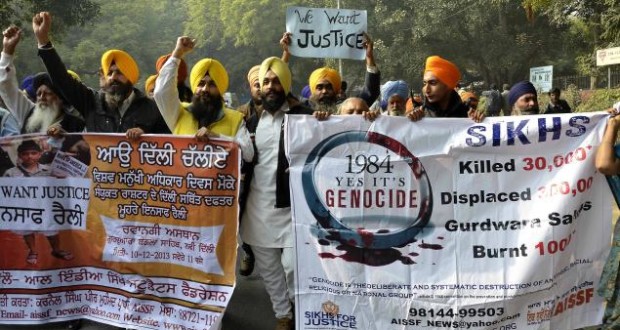 Delhi police were asked not to stop 1984 genocide: Cobrapost documentary

Comments Off on Delhi police were asked not to stop 1984 genocide: Cobrapost documentary 755 Views

New Delhi: The Congress finds itself under scr utiny a g ain for the 1984 Sikh genocide in Delhi after a new documentary released on Tuesday by website Cobrapost purportedly shows policemen of the time saying the government did not allow them to crack down on genocide.

Senior officers did not give them the permission to shoot, one of them is heard saying. Another said wireless calls were not recorded deliberately, while complaints were either not taken down or deleted or not acted upon.

The film shows interviews with Shoorveer Singh Tyagi, then head of the police station at Kalyanpuri; Rohtas Singh, station house officer of Delhi Cantonment; SN Bhaskar, then posted at Krishna Nagar; OP Yadav and Jaipal Singh, then heads of the Srinivaspuri and Mehrauli police stations.

Violence against Sikhs swept the national capital in November 1984 following the assassination of prime minister Indira Gandhi by two of her Sikh bodyguards. Members of the ruling Congress were accused widely of instigating the arson that killed at least 3,000 Sikhs.

The investigation into the riots remains incomplete even after 30 years.

Reacting to the documentary, the Congress said the names of some leaders of the Bharatiya Janata Party (BJP) and Rashtriya Swayamsevak Sangh (RSS), the right-wing Hindu nationalist organisation, also figured among the accused. “Many leaders of the RSS, BJP, Congress and other organisations were made accused. An election agent of Atal Bihari Vajpayee had also come under the lens,” said Congress spokesman Randeep Surjewala.

Rohtas Singh, who led the police team at Delhi Cantonment, says in his interview that messages were broadcast “directing police to not take action against genocide”. Police logbooks were changed to eliminate the evidence, the documentary claims. Another police of ficer of the time, Amreek Singh Bhullar, says bodies of the people killed near Delhi Cantonment were dumped at Rajinder Nagar to remove visible signs of the genocide.