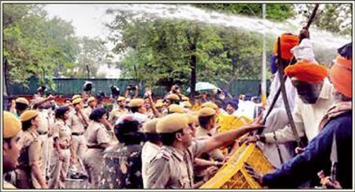 New Delhi: Water cannons were used on Sikhs protesting the creation of the HSGPC in New Delhi today. Members of the DSGMC marched on Sonia Gandhi’s house to protest the Congress Party’s interference in Sikh affairs after Congress played a pivotal part in the creation of the HSGPC. DSGMC members point out that the formation of HSGPC came right before elections in Haryana and claim that the Congress party is trying to use Sikhs as a pawn in their political strategy.


They also point out that there are many divisions in the Sikh panth already and further divisions will only decrease the ability of Sikhs to work together for common goals. To protest what they term as a political play by the same political party that is responsible for killing hundreds of thousands of Sikhs, they marched on Sonia Gandhi’s house, where they were met by the police who used force including water cannons on the Sikhs.

Perhaps this is exactly what the Congress Party wanted; to divide Sikhs even further and give a “legitimate” reason to use water cannons on Sikhs. This is likely the first of many negative effects of being less united.