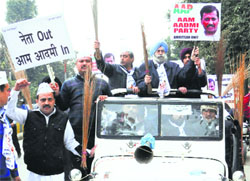 Amritsar, Punjab: Noted lawyer and Aam Aadmi Party (AAP) leader HS Phoolka today said the collapse of the Delhi government would not be a detriment to the functioning of the special investigation team (SIT) formed to probe the 1984 Sikh genocide.

At the launch of AAP’s ‘Jharu Chalao Yatra’ campaign in the state, Phoolka said, “The formation of the SIT was a valid decision of the Delhi government that was also approved by the Lieutenant Governor.”

When asked why Arvind Kejriwal didn’t seek the people’s opinion before quitting, he said the Jan Lokpal Bill was a part of the party manifesto, adding that it was the first time that a CM had quit for a strong anti-corruption law. He rejected the charge that AAP took the exit route to cash in on the “sympathy” in the Lok Sabha elections as also re-election for Delhi Assembly. He said AAP would contest the elections in the state and announce candidates soon.

Earlier, Phoolka kicked off the ‘Jharu Chalao Yatra’ campaign by paying tributes to Mahatma Gandhi at the historic Company Bagh here. The rally culminated at the Jallianwalla Bagh after passing through main parts of the city.

Sangrur: The district unit of AAP launched a nine-day rally here today. The rally would be taken out daily through various towns in the district till February 23. Dr AS Mann, AAP district convener, led the rally.