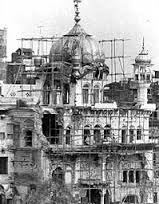 In a letter written to Sri Akal Takhat Sahib, Shunty said Sikhs were killed in the riots as they kept their hair unshorn. They had preferred to be killed as Sikhs.

He said that the victims of the genocide have not got justice even after 30 years of the incident. If those killed are declared martyr, it will not only motivate the family members of the victims but also inspire the future generations to keep their religious symbols intact even under extreme conditions.

Shunty said that the Sikhs not only in India but across the world want to build martyr memorials. As the victims have not been declared martyrs by the Akal Takhat, the desire remains unfulfilled.

Shunty is seeking support of all the religious, social and political organizations in this regards.

“We are observing the 30th anniversary of 1984 genocide this year,” he said.

Meanwhile, the Sikh Forum demands that the guilty of 1984 genocide should be punished. The forum appeals to people to join a demonstration from Mandi House on November 1.