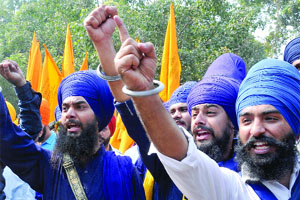 New Delhi: A four-member delegation led by a radical Sikh organisation, the Dal Khalsa, and consisting of political leaders from Kashmir and Tamil Nadu, submitted a memorandum to the United Nations here today, seeking a probe into the role of the Indian state in the killings of Sikhs in November 1984.

The five-page memorandum sought a probe on the lines of a UN internal probe in the killings of Tamils in Sri Lanka and similarly a resolution on the lines of the US-sponsored 2012 resolution indicting Sri Lanka for crimes against humanity, according to an official statement issued by the Dal Khalsa.

According to the statement, the representation to the UN Secretary General demands “what the UN did in Sri Lanka, it needs to do the same for the genocidal attack on the Sikhs in November 1984”.

Dal Khalsa president Harcharanjit Singh Dhami said, “The Dal Khalsa with the help of other Sikh organisations has organised a ‘Rights and Justice March’ from Gurdwara Bangla Sahib to Jantar Mantar. We held a rally here with representatives from Punjab, Tamil Nadu and the North-East.”

The Sikhs, Kashmiris, Tamils and Naga representatives, who had gathered at Jantar Mantar to pay homage to the people who were killed in November 1984, repeatedly sought the right to self-determination as the only solution to ensure that massacres like November 1984 do not recur. The rally was also attended by Hurriyat Conference chairman Syed Ali Shah Geelani and Delhi University teacher, Prof. S. A. R. Geelani.

Dhami added, “We choose not to go to the government, because over the past 30 years, they have not done anything to give us justice.”

Hundreds of people attended a Bhog ceremony in Singh Sabha Gurdwara at Tilak Vihar in memory of those killed during the 1984 genocide.

The residents had pasted photographs of those who were killed during the riots in Trilokpuri, Sultanpuri and other areas of the Capital.

Addressing the people, Gurmit Singh and Onkar Singh Thapar said that compensation given by the government is praiseworthy but not sufficient. The community will fight the cases till the accused are not punished.

They said that kirtan had been performed for the last three days. It was concluded today after the bhog.

Gurcharan Singh, a resident of riot victims colony, said that it was an important programme but not a single senior leader of the DSGMC came to attend it. They are just busy in the tasks in which they get publicity. Most of the residents in the colony are poor. They want a government job for one person in the family, he said.