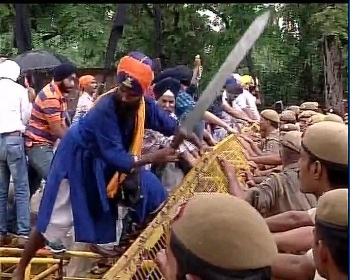 Amritsar, Punjab: The Dal Khalsa has put out a statement that they have “observed that due to egoistical reasons the Akalis led by chief minister Parkash Badal were preparing the ground for physical showdown with Sikhs of Haryana on the issue of HSGPC.”


Terming the emerging situation as dangerous and volatile, party head H S Dhami and senior leader Satnam Singh said there was large possibility of a clash amongst Akalis and Haryana Sikhs.They said if such situation arises it would bring a bad name to the community as it was brought during violent clash amongst Sikhs at Golden Temple on June 6. Dal Khalsa ridiculed the statement by SGPC chief Avtar Makkar that the keys of the Golaks of 8 Sikh Gurdwaras of Haryana will not be handed over to newly formed HSGPC. They said that this statement by Makhar leaves impression that Sikhs were fighting with Sikhs to wrest the control of golaks.

Expressing concern over the tense situation, they blamed the Badals for the present chaos. “Jathedar of the Akal Takht is considered to be an elderly person of the community,” they said and added that it’s ironic that he has already taken side.

Previous: ‘I pursued medicine because of dad’
Next: Delhi Police uses Water Cannons on Sikhs