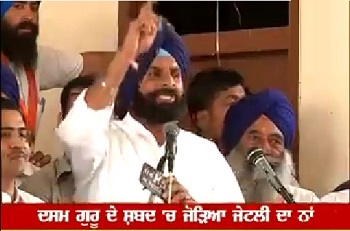 Chandigarh: A Chandigarh court issued fresh notices to Shiromani Akali Dal (Badal) minister Bikram Majithia for hurting the sentiments of the Sikh community by distorting a Shabad of Guru Gobind Singh Ji while campaigning for BJP leader Arun Jaitley during campaigning for the Lok Sabha poll.

The court was told that the previous notices were not served. The court asked Bikram Majithia to submit a reply on the issue raised by advocate Mandeep Kaur. The case will now come up for hearing on December 10.

Bikram Majithia had appeared before the Akal Takht after the controversy broke-out over his conduct. He was asked to perform Sewa (service) at five Takhats by Akal Takht Jathedar Giani Gurbachan Singh.