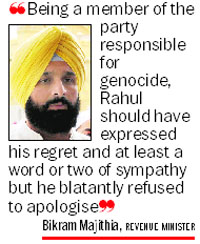 Amritsar, Punjab: Revenue Minister Bikram Majithia today demanded an apology from Congress vice-president Rahul Gandhi for allegedly admitting to the “involvement” of some party leaders in the 1984 Sikh genocide.

Talking to mediapersons on the sidelines of an event, Majithia said, “Being a member of the party responsible for genocide, Rahul should have expressed his regret and at least a word or two of sympathy but he blatantly refused to apologise.” He alleged such behavior was not suitable for a politician eyeing the prime ministerial post.

Majithia said if Rahul could be instrumental in raising the number of subsidised LPG cylinders from nine to 12, he should show his capability by bringing the guilty of the 1984 Sikh violence to book.

He said PPCC chief Partap Singh Bajwa should also clarify his stand on Rahul’s statement. He claimed the days of the Congress were numbered and the party would not even get 50 seats in the next Lok Sabha elections. He also distributed 874 bicycles under the state government’s Mai Bhago Scheme.