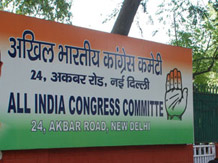 Cong seeks dismissal of lawsuit filed in US

New York, US: The Congress has approached a US court here seeking the dismissal of a lawsuit filed by a Sikh rights group over the 1984 Sikh genocide, saying American courts do not have subject matter jurisdiction over the case.

Congress party’s attorney Ravi Batra yesterday filed a memorandum of law in the Manhattan Court in support of a pending motion to dismiss the lawsuit filed by Sikhs for Justice (SFJ).

The new memorandum said that the SFJ “unjustly” sought to hold the Congress, which is not a “natural person”, liable in a US court for “acts occurring in India nearly three decades ago, involving only residents of India, with no plausible link to the United States.”

Batra said in the memorandum that the “controlling precedent” deprives the federal court of subject matter jurisdiction over the SFJ’s other claims under the Alien Tort Statute.

Under the controlling precedent, business entities and corporations cannot be sued in the United States for human rights violations committed in foreign countries.

Batra said the SFJ and other plaintiffs “wish to weaken American sovereignty and upset the comity amongst nations” by their lawsuit.

The SFJ said that it would challenge the Congress party’s motion to dismiss the human rights violation lawsuit. US federal judge Robert Sweet would hear arguments in the case on March 19.