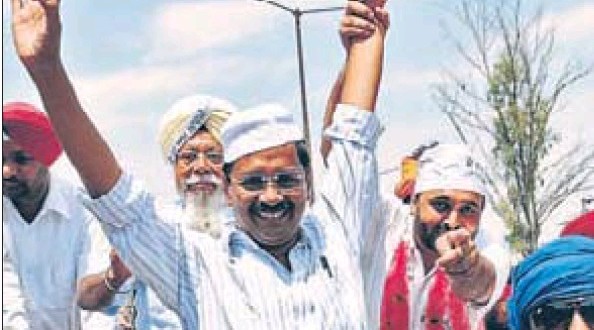 Sangrur, Punjab: Aam Aadmi Party convener and former Delhi chief minister Arvind Kejriwal on the last day of his three-day Punjab visit has slammed the BJP-led NDA and Congress-led UPA successive governments at the centre for playing with the sentiments of 1984 Sikh genocide victims and their failure to take measures to do justice with them.

Kejriwal, who was addressing a big gathering in support of AAP candidate Bhagwant Mann here on Sunday, said: “During their regimes since 1984, neither the Congress nor the BJP took any step to ensure justice for the Sikh riot victims, but the AAP government in Delhi, which lasted for just 49 days, had formed an SIT to probe the matter.”

Accusing the SAD-BJP government of failing to curb drug menace, Kejriwal again attacked Punjab cabinet minister Bikram Singh Majithia for drug racket in the state saying: “A minister and a close relative of the Badals is hand in glove with drug peddlers. How they can stop drug smuggling, which has ruined the future of youths of the state?”

He urged people to vote for a change. “You have a big opportunity to get rid of the Congress and the BJP. You have an alternative to weed out the corruption. If you vote against these traditional parties, AAP will form the next government at the centre.”

Previous: HAPPY VAISAKHI FROM TOM MULCAIR LEADER OF CANADA’S OFFICIAL OPPOSITION AND NDP
Next: ‘Remains’ of 1857 martyrs immersed in Ravi